Characteristics and Types of Buffaloes: Beauty and Power Combined

Current buffaloes are a domesticated species and there are more than 140 million of them on the Asian continent. You can easily identify them by their horns and corpulence. 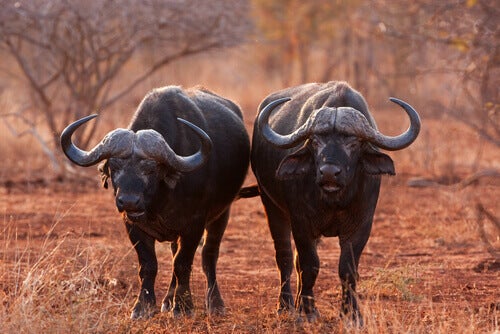 The origin of the buffaloes dates back to around 4,500 years BC in the region where the countries of Pakistan and India are currently located. This mammal is quite similar to the common bull although it doesn’t have a dewlap. This species has now progressively moved to the other continents and inhabits many areas there. Find out about the different types of buffaloes in this article.

The males can reach about 6 feet high at the withers and weigh about 1650 pounds. Buffaloes usually live between 18 and 20 years; however, this average could extend to 30 in captivity.

Buffaloes can both be devoid of hair or have short rigid hair with all colors between black and white. Also, their horns are flattened and curved backward.

As for their preferred habitat and environment, the buffalo has a preference for waterlogged or swampy areas. They partially dive there and walk on the bottom without difficulty thanks to their wide hooves, which keep them from sinking in the mud.

While some of them could be dangerous to humans in their wild environment, domesticated buffaloes are actually docile animals. This is the case with the Asian buffalo.

This creature inhabits all five continents but the Asian population is the largest. In fact, there are about 141 million domestic buffaloes on this continent alone and people have been exploiting them since ancient times to pull the plow in their swampy lands.

Buffaloes move in small herds in the wild, and their natural predators are the tiger, crocodile, and the wild Asian dog. They’re well-known for their stampedes and will run over anything in their path when they feel like they have to flee for any reason — it includes any fellow buffaloes who can’t keep up.

There are two types of buffaloes, according to the place they inhabit and the way we exploit them.

Differences between bison and buffaloes

Most people think bison are a type of buffalo but the animals that inhabit the USA aren’t so. Unlike the latter, bison have sharper shorter horns, the same that they use for self-defense. They’re extremely aggressive when threatened.

In addition, the North American animals have a big hump, a dark long mane, and a thick beard that reaches their thorax. They can weigh between 1700 and 2000 pounds and measure almost 13 feet.

Bison live in herds but these are hard to find these days. This is because humans have been hunting them for their skin and meat for decades. They’re currently an endangered species.

Humans value bison’s skin over many others because it’s tougher than that of other cattle and so the products made with it are high quality. Thus, bison leather goods such as gloves and sandals are in high demand.

The few specimens that have survived humans, their main predator, inhabit grasslands, open plains, woodland savannahs, and mountains and can tolerate altitudes of up to 13000 feet high.

The Story of the Spanish Fighting Bull
Bulls are impressive and beautiful animals that everyone loves to look at. They have become icons for countries like Spain, especially the Spanish Fighting Bull whose story will be told here in this article. Read more »
Link copied!
Interesting Articles
Mammals
All About Badgers: Characteristics, Habitat and Behavior