Characteristics of the Tasmanian Tiger

The Tasmanian tiger is an extinct animal with morphology and behavior similar to a hyena. In fact, this animal is its closest relative. 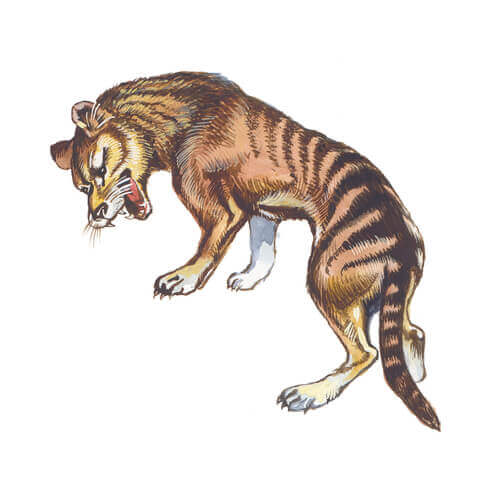 The Tasmanian tiger, also known as marsupial wolf, thylacine, or Tasmanian wolf was a marsupial mammal that inhabited the earth until the 20th century.

This curious animal was native to Australia, Tasmania, and New Guinea, and was the last living member of the genus Thylacinus. The fossil records of this species date back to the Holocene period. However, its relatives appeared earlier, during the Miocene period.

The beginning of the extinction of the thylacine began in Australia but they were able to survive together with the Tasmanian devil, their closest living relative.

The Tasmanian tiger was a super predator just like the placental wolves. However, it’s a marsupial, and so it has no phylogenetic relationship with canids.

Thanks to convergent evolutionary processes, it has a similar appearance and adaptations as wolves. That is, the characteristics of both evolved independently, but, given their similar lifestyles and predation, they developed similar morphological adaptations between them.

Characteristics of the Tasmanian tiger

Despite being an extinct animal, the Tasmanian tiger represents one of the few cases in which a morphological record of it could be made. They were present in modern society before their extinction.

The Tasmanian tiger is often compared to a hyena due to its posture and general behavior.

The behavior of the Tasmanian tiger

This animal prowled in a radius of 25 to 50 miles in their natural environment, but it wasn’t territorial. They hunted during twilight and sought refuge in small caves or trunks of small trees in the forest or hills during the day.

The first observers of the Tasmanian tiger described this animal’s behavior as:

The observers believed they mainly relied on their sight and hearing when hunting. This is because they didn’t think their olfactory lobes were particularly sophisticated.

Also, the breeding season lasted all year but mainly during the spring and summer. The young stayed in their mother’s pouch for up to 3 months after birth. They would stay in the cave while the mother hunted, but once they abandoned the pouch, then they were large enough to sort of fend for themselves.

Researchers studied their locomotive function during their observations of them in captivity. What they discovered is that the Tasmanian tiger was rather clumsy when they walked. Thus, they think these animals were incapable of running fast. However, they also noted that their bipedal jump is similar to that of a kangaroo.

The Tasmanian tiger was exclusively carnivorous. Their stomach had a large layer of muscle that they could stretch. Possibly, this was an adaptation to be able to accumulate large amounts of food for long periods of time when food was scarce.

The Tasmanian tiger became extinct about 80 years ago. The last specimen died in captivity in 1936.

The hunting of this animal in the Australian antipodes contributed to its extinction. However, recent scientific studies showed that the Tasmanian tiger was doomed to extinction as reflected by its DNA data.

This may be shocking, but the genetic diversity of this animal showed a drastic decline pattern even before people began to hunt it. In the natural world, this decrease in long-term genetic variability translates into greater vulnerability to environmental changes. Eventually, this will lead to extinction.

Australia: The Land of Marsupials
Australia is known as the land of marsupials as there are just so many of them that live there. Find out about the most popular ones here. Read more »