Capable of sleeping practically all day long, due to the fact that the food they eat is low in calories, the body temperature of this species is 30ºC (86ºF), which is 6ºC (11ºF) lower than most mammals. 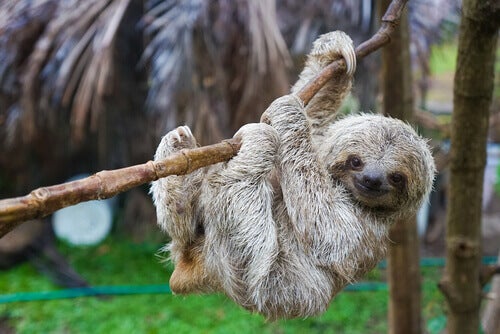 Sloths are famous for being very slow animals, but the truth is that there are dozens of curiosities about them. So, in this article let’s talk a little about these animals.

What is a sloth?

The first thing we should clarify is that, even though these mammals are arboreal, we can’t mistake them for primates. They’re direct relatives of anteaters, and are classified as two-toed sloths and three-toed sloths.

This classification is due to the fact that sloths have either two or three toes with powerful hooked claws, which allow them to hang from trees. These claws also allow the young to remain hanging from its mother’s belly because it’s born with its claws almost fully formed.

The classification of this species gives us a glimpse of one of the sloths’ greatest curiosities. The two-toed sloth has seven cervical vertebrae, like the vast majority of mammals. But the three-toed sloth is one of the few mammals that has more. In fact, they have more vertebrae than a giraffe, which makes their neck tremendously flexible.

Their closest relatives are insectivores, which doesn’t prevent sloths from being mainly a folivore: that is, they eat plants. One of the greatest curiosities about sloths is their thick and rough fur, with grayish and brownish colors.

Interestingly, some sloths use the algae in their fur as a food supplement. Even though it may seem incredible, these algae can grow in the sloth’s fur, giving it a greenish shade that allows it to camouflage itself.

Leaves provide very little energy, so sloths have a stomach that occupies a third of its body, and can digest for several weeks in its multiple chambers, similar to gorillas.

Curiosities about sloths: why are they so slow?

Sloths are well-known for their slowness, because they have very little muscle mass and a very slow metabolism. Specifically, sloths’ metabolism is the slowest of all mammals, even if some species are surpassed by the panda bear.

Due to this slowness and metabolism, sloths spend days in trees sleeping. They only come down to defecate or for extreme necessity, such as drinking water. On the branches, they compensate their slowness with a certain protection against predators such as some birds of prey.

Sloths don’t only have algae on their fur, but moths also have a symbiotic relationship with these animals. When the sloth comes down to defecate, the moths that live in its fur lay eggs in its feces.

When they hatch, the larvae feed on the sloth’s feces and, when they transform into moths, they return to its fur, where they’ll die and feed the algae that the sloth itself uses as a supplementary nutrient. Did you get all that?!

Sloths are vital to ecosystems, as this species is an important seed dispenser. They consume hundreds of species of plants whose fruits are difficult to move.

A large number of sloths are in danger of extinction mainly due to the destruction of their natural habitat. Given their sluggishness, they’re even more affected by these changes in the ecosystems they live in.

Unfortunately, their friendly and inoffensive appearance turns them into victims of illegal petting and trafficking, in addition to their use for tourism purposes. We must remember that wild animals aren’t pets and mustn’t be exploited for tourism in unethical ways.

Brazil’s Incredible Fauna
This country is known for its great biodiversity. Learn about Brazil's incredible fauna and the endemic species that can only be found there. Read more »
Link copied!
Interesting Articles
Mammals
Types and Characteristics of Asian Elephants

It's common to come across a stinky smell of skunk spray on the road. Surely, their strong odor will allow…