The Behavior of the Red Panda

The red panda is a skilled tree climber that inhabits the mountains of Asia. It's name can be misleading, since it's much more similar to a raccoon in its appearance than it is to a panda bear. 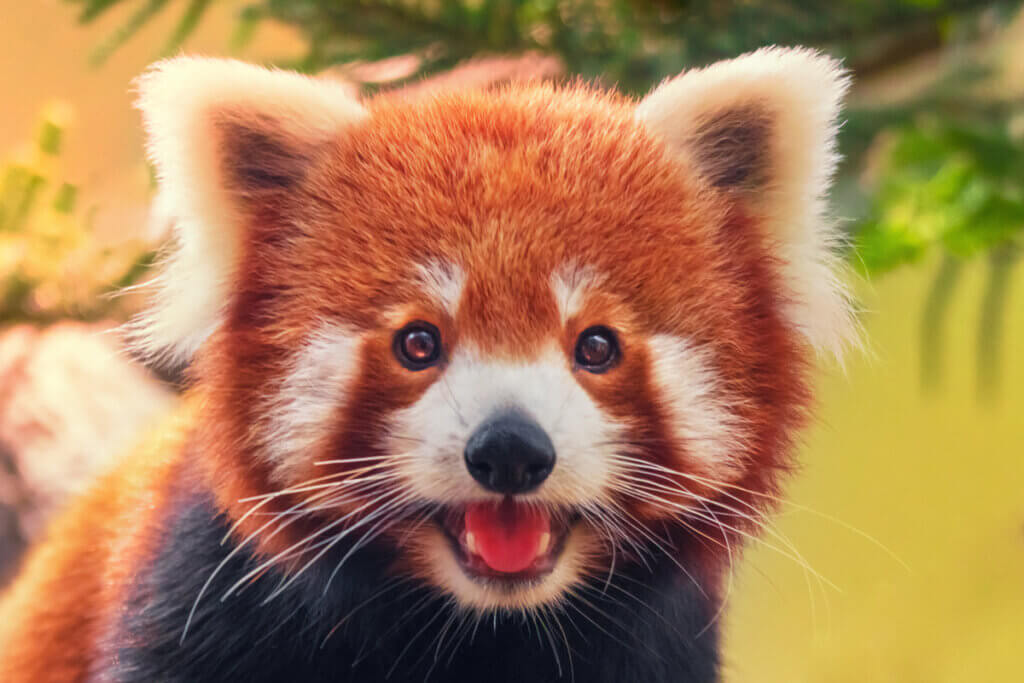 Despite its nickname, the red panda has very little to do with the giant black and white bear with whom it shares its name and habitat. Red pandas are much more similar to mustelids than they are to members of the bear family.

Their taxonomy has always been a major challenge for scientists, as they’d been classified within the Procyonidae family and also the Ursidae (bear) family. Currently, however, they belong to their own family, the Ailuridae family, of which they are the sole member. To find out more about these mammals, keep reading.

Is the red banda a bear or a raccoon?

The red panda inhabits the high-altitude bamboo forests of the Nepalese mountains, norther Birmania (between 7200 and 15,750 feet altitude), and the central regions of China.

This animal has the approximate size of a domestic cat, without taking into account its tail, which adds nearly 20 inches to the length of the animal’s body.

Red pandas possess reddish-brown hair and their faces have white spots that, along with their striped tails, also remind us of raccoons. Thanks to their facial markings, distinguishing between different individuals is possible.

Their claws are retractable and they have a false thumb, just like panda bears. This isn’t actually a sixth finger, but rather an extension of the bones of the wrist that makes it easier to grasp trees.

Life among the trees

These animals spend most of their time in the trees and even sleep in trees. They may curl up and cover their faces with their tails or they may sleep with their legs stretched out. The latter is a very characteristic position that appears in many photographs of the species. What’s more, the red panda can spend most of the day sleeping–up to 15 hours per day.

Pandas are excellent climbers and are very agile while in the trees.

These mammals are most active at night and at sunrise, which is when they go in search of food. Being omnivores, they feed on bamboo, fruit, acorns, roots, eggs, insects, and small animals like lizards, baby birds, and rodents.

The behavior of the red panda

These are solitary animals that you can only see together during mating season, in winter. Their young are born in spring and summer, and litters usually consist of between one and four babies.

Females build their next in hollow trunks and cracks in rocks. There, they remain sheltered with their young for approximately ninety days after giving birth. Mothers care for young red pandas until they’re six months old, and males take no part in their upbringing.

The life expectancy of the red panda is between eight and ten years. However, in captivity, they can live for up to fifteen years. Many zoos around the world work together as part of a global plan for reproduction in captivity. These zoos exchange specimens in order to increase the genetic diversity of this species.

One of the problems with the breeding of red pandas in captivity is the high infant mortality rate. Therefore, the artificial upbringing of animals rejected by their parents is an important part of the program. In the same way, the program places special importance on the study of the causes of high mortality rates.

The most common illnesses that experts have observed among specimens in this program are distemper, parvovirus, rabies, toxoplasmosis, and leptospirosis.

The conservation status of the red panda

The red panda is an endangered species that’s at risk of extinction, given the reduced number of specimens in the wild. Unfortunately, the current tendency of their populations is decreasing. As is often the case, human beings are responsible for this reality. Factors like the destruction of their habitat for agriculture, deforestation, and poaching are all to blame.

What’s more, wild red pandas are so few that inbreeding is a present factor among the species. This poses yet another problem when it comes to their conservation.

As you can see, the red panda is an endearing mammal with an adorable appearance that will win your right over. But, regardless of its appearance, every species deserves our conservation efforts. Research and breeding in captivity are essential to the survival of the red panda and many other species that are in the same situation.

The Tanuki: Is it a Raccoon or a Dog?
We all have a favorite wild animal that we wish we could have as a pet. Today, we'll talk about the Tanuki, an animal that resembles a dog and a raccoon.  Read more »
Link copied!
Interesting Articles
Mammals
What Is an Animal Generation?

Mammals
Discover the Little Known Aristocrats of the Animal Kingdom

Many cultures recognize cats as the aristocrats of the animal kingdom. In addition to dominating many of the ecosystems they…

Mammals
Find Out All About Cunning Wild Canids

The canid family consists of carnivorous animals of all types, colors, and sizes. In general terms, all its members are…

Interesting Articles
Mammals
What Is an Animal Generation?