The Buru Babirusa: Origin and Habitat

The Buru babirusa is an artiodactyl mammal, related to the wild boar and to pigs. In addition to the unique arrangement of its fangs, this strange animal has many remarkable characteristics. 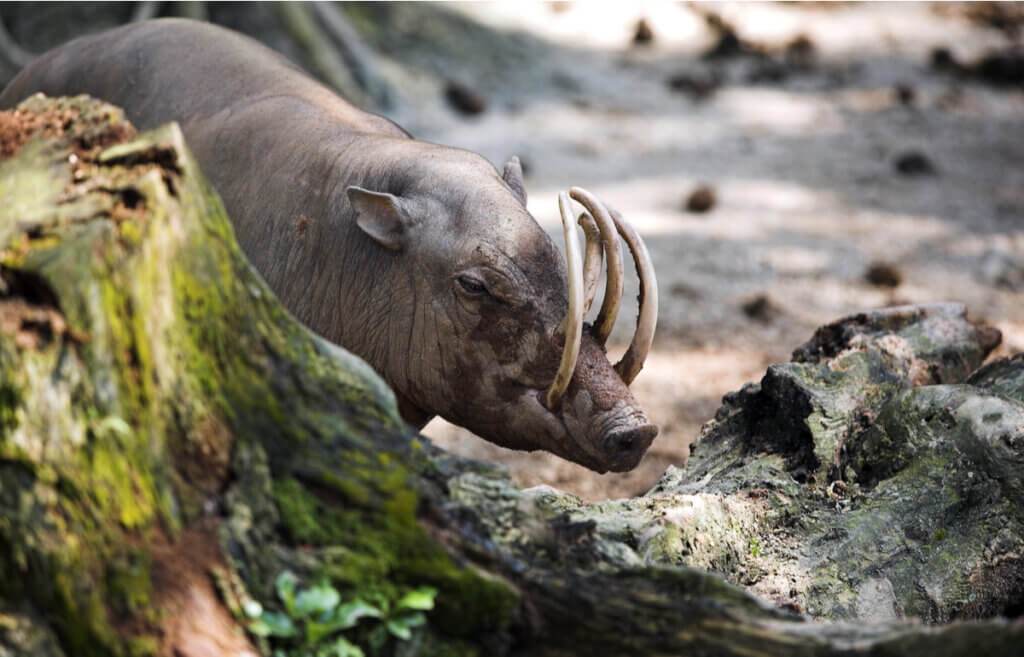 In nature, you can find all sorts of interesting and unique animals, like the Buru babirusa, a mammal that resembles a pig. It comes from Indonesia but inhabits only some of this country’s islands.

Despite being very similar to the pig, it’s not well known outside its place of origin. For this reason, we want to show you a series of interesting facts about this strange and fascinating animal.

This hog is related to other animals found in the Suidae family, such as wild boars or domestic pigs. Within this grouping, it’s part of the genus Babyrousa, which consists of four different species.

The origin of the Buru babirusa

This peculiar pig comes from two of the Sula Islands, specifically Mangole and Taliaby, as well as Buru, both located in Indonesia. Its own name in Malay means “deer pig”, an appellation related to its tusks.

As for the species, the babirusa goes by the scientific name of Babyrousa babyrussa. Its appearance is very similar to that of a pig, although it has certain characteristics that set it apart and make it easily identifiable.

This swine reaches a size of up to 2,5 feet and is 3 feet, 4 inches in length, approximately. What’s more, it weighs approximately 220 pounds. At the same time, its hair is scarce and dispersed throughout the skin, which is thick and wrinkled.

Another of the most characteristic features of the babirusa has to do with the fangs on its snout. These tend to curl upwards in such a way that they can pierce the flesh of the muzzle and reach the forehead.

In addition, it’s important to note that the upper canines or tusks are present only in males. In females, these canines are barely visible, so sexual dimorphism is very clear.

Although much of the information about its habitat is unknown, experts believe it to be the same or similar to that of B. celebensis. Therefore, it inhabits the rainforest, near the banks of rivers and ponds.

This is because babirusas love to spend time submerged in either in mud or water. This species is predominant in the interior of the island, in comparison to other species of the genus.

Their presence has also been observed in the salt ponds, where they perform courtship-related behaviors. However, the main environment of the Buru babirusa is that which contains Pangi trees (Pangium edule).

In relation to its diet, the babirusa is omnivorous, as are most members of the Suidae family. Its diet is consists of a great variety of different foods, such as leaves, roots, fruits, or small dead animals.

However, taking into account that they don’t hunt to survive, we can classify them as scavengers of small vertebrates or invertebrates. They simply feed on animals that they can find in their search for other foods.

Not all the characteristics of this strange mammal are based on morphological characters. Here are some more curiosities about the babirusa and its relationship with the environment.

The babirusa is a social animal that tends to live in small groups. Each group consists of a single male, several females, and their offspring. However, they’ve also been observed interacting peacefully with other groups.

Their relationship with humans

The babirusa is an animal of calm character, even in captivity. It has also appeared in literature as a pet of a Jules Verne character in the book Twenty Thousand Leagues Under the Sea.

Currently, the babirusa has been declared a vulnerable species located in very specific areas. Unfortunately, experts are unaware of the number of adult individuals and the current status of the population.

Its decline in the past has been the result of human intervention, primarily. It’s lost its habitat to both logging and the conversion of land for cultivation.

Another cause, although less known, is the hunting of this animal food, as it is considered a delicacy. In particular, non-Muslim populations have been responsible for the hunting of babirusa.

Finally, as you can see, the Buru babirusa is an animal with a very interesting appearance and behavior. However, this mammal isn’t one of the most popular, perhaps because it isn’t so well known.

Therefore, the greater your interest and curiosity regarding nature, the more you can learn about these and other animals. If this article has sparked your curiosity, there are many more interesting animal facts to be discovered on our site!