The Characteristics and Behavior of the Anteater

As its own name indicates, this mammal feeds mainly on ants; it "hugs" its predators to defend itself and sticks its claws into them dissuade them. Discover more about the characteristics and behavior of the anteater in the following article. 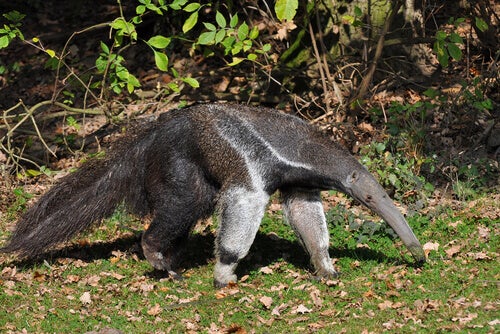 This animal, known for its long snout and sticky tongue, lives in South and Central America. Its main food source is ants, which it catches more than efficiently. In this article, we’ll tell you all about the characteristics and behavior of the anteater.

Characteristics and feeding of the anteater

The anteater belongs to the placental mammal family and has a robust body -it can weigh 90 pounds and measure over 4 feet long. Its coat varies between different shades of gray, black, and beige. What’s more, its front legs are long and have strong, curved nails that allow it to climb trees or walk through vegetation.

The head of the anteater is small in comparison to the body and its long snout holds a tongue that can measure up to 2 feet long. It has no teeth but a great sense of smell, which allows it to find food.


The diet of this animal consists of termites and ants –it’s a myrmecophagus animal– and its technique to get food is very effective. First, it breaks the anthill or termite mound with its nails. Then, it introduces its snout and takes out its slimy tongue, which it uses to capture the insects.

Habitat and behavior of the anteater

The anteater lives in jungles, forests, grasslands, mountains, or savannas… Anywhere it can find ants or termites! It’s a passive, peaceful and quiet mammal that only attacks to defend itself when necessary. In this case, its technique consists of “embracing” danger and digging in its claws, in order to dissuade its predators. In that sense, its main predators are jaguars, pumas, and wolves.

The anteater’s an animal of solitary habits. In fact, it only joins with another member of its species when in heat or during the time that the baby remains next to its mother. Females have only one baby per litter after 190 days of gestation. From birth, the mother carries her baby on her back. The baby, in turn, grabs on with its claws and camouflages itself with its mother’s coat.

The general characteristics are the same among all anteaters. However, we can highlight four species, according to their location or size:

This is the largest insectivore in the world. It has daytime habits and, at night, it returns to its cave to protect itself from the cold. It uses its sense of smell to find food, and once it finds it, uses its powerful claws to catch it.

The giant anteater moves with great speed in spite of its size and eats with a voracious appetite. It inserts its tongue up to 150 times per minute in an anthill. This technique is very effective and necessary to avoid ant stings. Unlike other species, the giant anteater doesn’t have a prehensile tail.

It’s also known as a pygmy anteater and is the most difficult to find. This is due to its shyness and stealthiness while walking among the trees, from where it seldom descends. It has a beige coat and a shorter face, feeds on larvae (besides ants), and isn’t very active. Its prehensile tail allows it to hang upside down from the branches and get food thanks to its long tongue.

The northern tamandua spends most of its life among forest trees, mangroves, and savannas. It rips termite mounds and ant hills from the ground and logs and slips its tongue between them to get food.

It’s also called ‘collared anteater’ because it has a lighter stripe of hair around the neck. It can live in jungles, savannahs and forests, as long as they have fresh water nearby.

We hope you’ve enjoyed learning all about the behavior of the anteater!

The Collared Anteater: All About this Species
The collared anteater is a typical species of South America. It dwells mostly in arid forest regions and savannas.It is also called the Southern tamandua. Read more »