These species are defined by what they eat. This reflects their main physical trait: the long, sticky tongue with which they catch their prey. 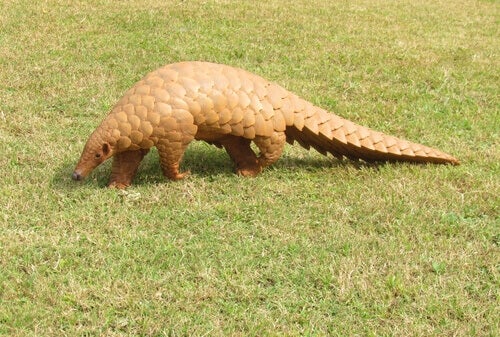 Basically, myrmecophagous animals are those that feed on ants and, on special occasions, termites. Even if the giant anteater is the best-known of the family, there are also other species with the same gastronomic habits. Find out more about them below.

With a great power of evolution and adaptability to their environment, myrmecophagous animals have a mouth with fewer teeth than other mammals and long slimy tongues for picking up food. They can introduce their long snout into anthills, and their strong claws allow them to dig the soil. Some myrmecophagous species are the following:

The scientific name of the pangolin —photo at the beginning of this article— is Manis. This animal lives in the tropical regions of Africa and Asia. Its main characteristic are the plate-like scales that completely cover its body. In addition, they roll themselves into a ball when they’re in danger and use the scales as a shield.

This animal can measure between 0.5 meters (2 ft) and 1 meter (3 ft). Females are smaller than males, but both have strong legs that allow them to dig. It lacks teeth, but its powerful tongue helps it get its food.

The pangolin lives alone or in pairs, and as a viviparous species, the female gives birth to only one live offspring each year. In recent years, their population has declined due to poaching for their meat and scales, which are believed to have medicinal properties.

2. The giant anteater: the most famous of the myrmecophagous animals

Without a doubt, the giant anteater or the ant bear is the best known myrmecophagous animal. Its name reveals its favorite activity! That’s right, because this animal —which doesn’t belong to the bear family— spends its life looking for ant homes.

Its fur is black, gray, white and brown. Moreover, its powerful claws allow it to break up anthills with an impressive ability. Once that happens, it introduces its snout and gets the food with its tongue. It must act quickly to avoid the ants stinging it in self-defense.

The aardvark is a mammal native to Africa, specifically to savannahs and forests, with nocturnal and solitary habits. Although it resembles the anteater due to its long snout, and the pig due to its robust body, the truth is that it’s related to the shrew and even to the elephant.

It attacks anthills and termite nests while collecting the food with its slimy tongue. The aardvark digs its own burrow thanks to its strong legs, but its walking pace is slow. Additionally, it has a great sense of smell and thick skin to protect itself from the sting of its prey.

The numbat is a marsupial that lives in the desert areas of southwestern Australia. Unfortunately, it’s in danger of extinction due to habitat destruction and predation by animals introduced by man.

Even if it seems incredible, this animal is also part of the group of myrmecophagous animals. However, its diet is based only on termites. It has strong claws, a long and sticky tongue, a cylindrical snout and a hard palate to crush its prey before swallowing it, just like the rest of the species in this family.

They only come together to mate during the summer. Thus, between two to four offspring are born each season. Immediately after birth, the offsprings are “dragged” to the mother’s womb and attached to a nipple to feed on.

The Collared Anteater: All About this Species
The collared anteater is a typical species of South America. It dwells mostly in arid forest regions and savannas.It is also called the Southern tamandua. Read more »
Link copied!
Interesting Articles
Mammals
The Role of the Gray Squirrel in Forests