The Coati: Characteristics, Behavior and Habitat

There are only two species of coati: the white-nosed coati and the ring-tailed coati. Both share much of the same habitat, and they actually live in several regions of Central America. 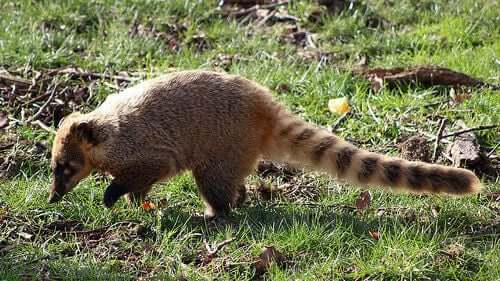 The coati is an odd-looking American mammal and has a unique anatomy. It’s a cousin of the raccoon and from the Nasua genus. Nasua translates to “long nose” in the local language, but it also has many other names such as the gato solo, pizote and cuchuchos, all translating to white-nosed coati. The Spanish actually mistook it for a badger the first time they saw one.

The coati is a raccoon-like animal, but brown in color, with an elongated snout and has a similar tail to a lemur. Some people even confuse them with this primate. They have powerful paws and double-jointed ankles, allowing them to climb up and down objects with ease.

This Procyonidae can grow to be as long as 4.6 feet, but it’s also very short. The color of their fur can be light brown, black, white and even red. Coatis move easily through trees thanks to their ankles, but also walk flat-footed on the ground.

When it comes to diet, coatis are omnivores and eat pretty much everything. Therefore, they survive well in both jungle and urban ecosystems. They eat fruit, insects, eggs or small birds.

They’re very social and live in packs of up to 25 individuals. Packs are usually all females that are related to one another. Males stay with the pack during their youth and only return during their adult life to reproduce. After the mating season, a female’s pregnancy lasts approximately two months and she gives birth to between two and six young. Once they’re born, she’ll build a nest in a tree, which is very rare in mammals.

A pack tends to have lookouts that patrol their territory for predators such as the jaguar. Their job is to alert the pack of any danger. Coatis have a great sense of smell and they’re constantly using their elongated snout to scour.

Coatis live in the Americas and can be found anywhere from Argentina to Uruguay. They can even be seen in the southern states of the USA. They generally live in forested areas, specifically tropical forests. However, some populations have been sighted in the deserts of Arizona.

Unfortunately, in some countries they’ve become an invasive species. After many countries like Spain banned invasive species such as the raccoon, the coati became a new fashionable pet. This species brought the same problems as the raccoon. They are exotic pets with strong jaws and claws and they tend to bite and scratch. Also, because they’re very social, life indoors greatly affects them.

The most dangerous problem with the coati is that they can get rabies. They’re similar to the red fox, meaning they act as a wild vector and can spread one of the most dangerous infectious diseases in the world. A disease that’s now fairly well controlled, but these invasive species can help it to reappear.

The coati also feeds on the eggs of several endangered species, which affects the conservation of these birds. Nowadays there are several wild colonies in Spain, especially in Mallorca. Here, there aren’t enough centers to accommodate them, so authorities usually have to euthanize them. There need to be more facilities to care for these animals.

Meet the Baboon: Its Habitat, Characteristics, and Behavior
One of the largest and most outstanding species of primate known for its complex behavior is the Baboon. Read along to learn more about them! Read more »
Link copied!
Interesting Articles
Mammals
What Are the Differences Between Jaguars and Leopards?