The Gelada: Characteristics, Behavior and Habitat

The gelada is a truly fascinating primate and is also known as the 'bleeding heart monkey' because of the intriguing red coloring on their chest. 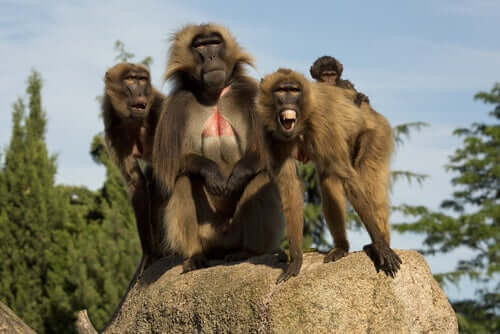 There are hundreds of species of primates, but few are as elusive as the gelada (Theropithecus gelada). This species survives in the highest grasslands of Ethiopia and is known as the ‘bleeding heart monkey’ because of the unique color pattern on its chest.

The gelada is the last surviving member of the genus Theropithecus which the giant baboons belonged to. One of them, Theropithecus oswaldi, lived in many European countries and weighed as much as the huge primates like the present-day gorilla.

Characteristics of the gelada

The geladas are medium-sized primates with brown fur. They can weight up to 65 lb, although it’s more normal for them to weight between 26 and 45 lb. Both males and females have a red-color chest in the shape of a heart.

They have a non-prehensile tail which is only found in American primates like the capuchin monkey. They can live for up to 14 years, have a reproductive cycle of just over a month with a six-month gestation period.

There are actually two subspecies, T. gelada gelada and T. gelada obscurus, whose fur is darker. They also present great sexual dimorphism. Males have more hair, especially on the shoulders, head, and cheeks. Their pale eyelids and huge fangs mean that they can make some truly terrifying threatening gestures.

Unlike many primates, the gelada is exclusively a land animal. They live in societies where a male leader has a group of females and another male who is known as a follower. However, these central groups are usually supported by another 300 individuals.

Geladas spend most of their time eating leaves and grass and spend a lot of the day handling food. This has led to greater development of their opposable thumbs. The fact that they devote much of their time to food means that, although they tend to isolate themselves, like other primates, they also communicate using murmurs.

These vocalizations make them the only non-human primate that can modulate the volume and tone of their voice quickly to suit the moment, much like a human. They do this by clicking their lips.

These animals have a very special relationship with the Ethiopian wolf. This species is in danger of extinction, and the geladas allow it the hunt among them, thus helping to sustain the species. Since these wolves prey on rodents, it doesn’t appear that the gelada gets any benefit from this relationship. This would indicate that this is simple altruism or indifference.

Geladas spend most of their time eating leaves and grass and spend a lot of the day handling food. This has led to greater development of their opposable thumbs.

Geladas only live in the high mountain grasslands, between 4,500 and 14,500 ft high, and the two subspecies, T. gelada gelada and T. gelada obscurus, are only found around Lake Tana and Lake Takezé in Ethiopia.

Neither subspecies is considered to be endangered because there are more than 50,000 specimens. Despite this, its population is seriously threatened by poaching because they are used for research and to make wigs. The fragmentation of its habitat is also a threat.

However, the biggest threat that this animal faces is climate change. The high altitude of their habitat maintains the right temperatures for them and their food. Therefore, increasing temperatures mean that the gelada needs to move higher up each year. The problem is that they can go no higher, so now, their habitat is simply shrinking. This makes the gelada a true climate change refugee.

The Patas Monkey: Meet This Fascinating Primate
In this article, we're going to tell you about the fascinating patas monkey, the fastest primate in the world. Learn more interesting things about it here! Read more »
Link copied!
Interesting Articles
Mammals
Types and Characteristics of Asian Elephants