Types and Characteristics of Asian Elephants

Asian elephants are very well-known mammals in the Asian continent. They’re popular animals in zoos and circuses and they also inhabit tropical forests. 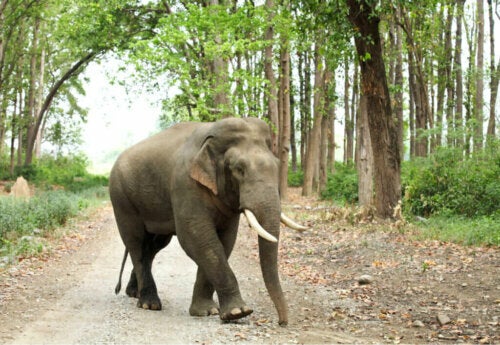 Asian elephants are big mammals that inhabit rain forests. Their presence transmits power and nobility. These mammals are eye-catching due to their habits. Despite their size, they don’t sleep much, and they love to clean themselves with their long trunks.

One of the most significant facts about the Asian elephant (Elephas maximus) is that this wild animal was domesticated by humans many years ago. Thus, this powerful mammal has been used to move heavy objects, transport people, and even fight wars.

Asian elephants are calm and sociable animals. They travel long distances to find food and also play important roles in several Asian cultures. Below, discover what this emblematic animal wants to teach us.

The habitat of the Asian elephant

Asian elephants, as a species of Proboscidean mammal of the Elephantidae family, play a cultural role in the Asian continent. These elephants live from southern China to the shores of the Persian Gulf and southern Mesopotamia.

It inhabits the following Asian countries: Sri Lanka, Bangladesh, Sumatra, Borneo, India, south of the Himalayas, and near the Yangtze River. In these places, these mammals inhabit open areas covered with low vegetation and bushy areas.

In India, Asian elephants are used for activities where their strength is required. For example, to move construction material. People have represented some of them as gods, such as the god Ganesha, remover of obstacles, the patron of arts and sciences, and the deva of intellect and wisdom.

The physical characteristics of Asian elephants

The Asian elephant has a big head, short neck, long, muscular trunk, barrel-shaped body, and big legs. The ears of Asian elephants are small and round and don’t cover the shoulders. It has an arched back, long tail, and thick, tough, oily skin.

Its teeth are characteristic, as it has fangs that aren’t canine but rather elongated incisors. They’re long and big in males and some females don’t even have them. Also, they have four big molar teeth.

What do Asian elephants eat?

Adult individuals eat a lot of roots, fruits, herbs, bark, and shrubs. They can eat up to 300 pounds of food in a single day. Their main activity is to eat. They do so in the morning, in the afternoon, and in the evening.

For Asian elephants, water serves two purposes. Firstly, this animal likes to be near water sources with its herd so it can drink 140 liters every day. Secondly, these pachyderms bathe in the water using their trunks. To do this, they suck it and spray it over their back.

Asian elephants have contributed a lot to Asian culture from generation to generation. For example, in past centuries, they played a very important role as battle animals and helped win wars.

Sadly, these elephants sometimes are treated unfairly. Humans use their strength for excessively heavy work. In some countries, they’re also used as tourist attractions in situations of abuse that affect their quality of life. All of this has resulted in a drastic population decrease in the wild.

Asian governments have developed regulations that seek to protect and respect the domestication of Asian elephants, as these animals are endangered.

Protecting Elephants from Poaching
Welsh zoologist Nick Murray has dedicated his life to protecting elephants from poaching for more than 10 years. Read more »

Link copied!
Interesting Articles
Mammals
What Are the Differences Between Jaguars and Leopards?