Why Are Killer Whales Known by this Name?

Their lethal hunting techniques have earned them this nickname. In addition, they can team up in order to take on much larger prey. They make effective use of their sharp teeth. 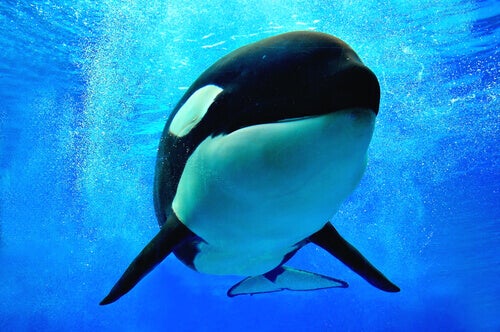 Intelligent, lethal, fast and sociable, killer whales look like machines engineered by nature to fulfill one purpose: to kill. Their lethality is surpassed only by one animal: the human.

The killer whale is one of the best-known mammals on planet Earth. However, we must ask ourselves: why are they known as killer whales? Well, if the answer in the previous paragraph was unsatisfactory, in this article we’re going to speak at length about one of the great sea predators.

The killer whale, also called orca, belongs to the Delphinidae family along with different types of dolphins that inhabit the seas. So, calling them whales is wrong. In fact, whales are part of a completely different family, the Balaenidae.

Orcas and dolphins have many traits in common. They possess a row of sharp teeth, a blowhole on their bodies, and the ability to echolocate like beluga whales. Their high intelligence allows them to coordinate actions with other individuals of the same species.

At first glance, it seems that killer whales don’t differ much from other members of their family, apart from their physical morphology  which includes their elongated body, white lateral spots mimicking an eye shape, and great mobility for their size.

So, why killer whale? Well, this is due to the great stories of the sailors from the past, and the hunting techniques they use when chasing their prey. The most curious thing about orcas is that each group has very different techniques to any other group anywhere in the world.

Also, they’re erroneously known as whales due to a misuse of the name killer whale. In fact, the correct term should be whale killer because of their great efficiency in taking down large prey.

We’ve mentioned that killer whales have different hunting techniques, depending on the region of the planet they inhabit. Killer whales adapt to the environment in order to hunt the main food in the region. That’s to say, orcas don’t feed on a particular species. They tend to look for the most freely available animal in the environment.

For example, in the Scandinavian fjords, killer whales consume herring. They surround the school of fish in such a way that the herring form a sphere and are slowed down.

Among the killer whales’ favorite prey are sea lions, penguins, seals, fish of different families, other dolphins in some cases and, of course, whales.

They do all this in collaboration with their clan members, especially if the prey is a whale. Killer whales surround the large animal, leaving it with no way of escaping. Then, they begin to bite the animal until it bleeds to death or no longer can defend itself due to its wounds.

But this doesn’t stop there. There’s evidence of humans collaborating with killer whales throughout our history, an activity that’s still going on today. One of the most famous cases was that of Old Tom in Australia that was joining the whalers in the area.

Old Tom was a seven-meter (23 ft) killer whale that could recognize the ships of the Davidsons, a family of whalers that was hunting in the region. Tom collaborated in the hunts with these whalers. To thank it for its help, they gave it the whale’s tongue and lips, a pact called the “law of the tongue”.

We’ve mentioned that they’re very sociable animals, capable of working as a team for a common goal. However, we’ve never specified how sociable killer whales can be.

They have a great memory, as we mentioned in the case of Old Tom. Also, animals in captivity can even recognize human faces through the glass. In addition, orcas recognize each other by their body markings. These marks are unique to each individual in their pack and also around the world.