Among the endemic species that live in this huge eastern country are large predators, birds of prey, fish and very curious animals. 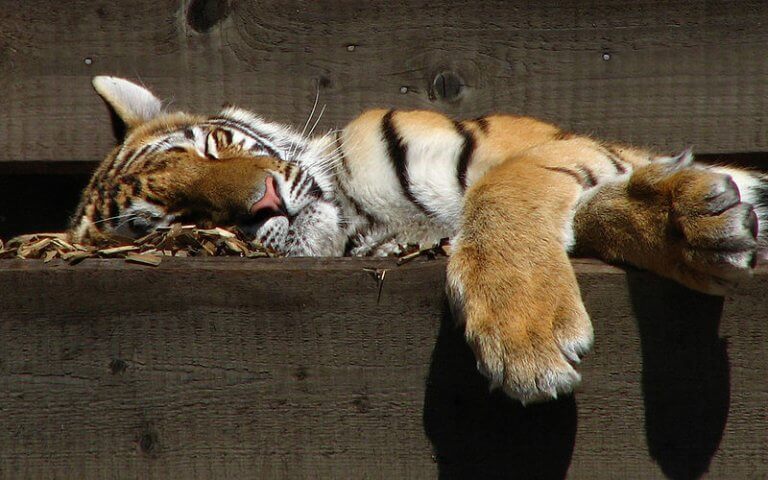 The largest country in the world is home to thousands of living creatures. In fact, some of the animals that live in Russia don’t inhabit any other place in the world. Therefore, in this article, we’ll be talking about what these respective species are. Are you ready?

Animals that live in Russia and nowhere else in the world

Within the vast Russian territory, we can find many different animal species. However, some of them are native or originate from the region, making them very interesting to learn about. We can even find endemic ones, meaning they only live in that country and in no other, at least in the wild.

This tiger is also known as “Amur tiger” (the featured picture of this article). Its scientific name is Panthera tigris tigris and it inhabits the forests of southeastern Russia near the Amur River and near the border with China. In addition, it’s the largest of the Felidae family and is unfortunately endangered due to poaching.

It feeds mainly on ungulates such as deer and elk and shares the territory with large predators such as wolves, bears, and leopards. In popular culture, it represents several Russian cities and regions such as Vladivostok and Irkutsk.

Also known as “Golomianka”, this is a fish that lives in the famous Baikal Lake (the deepest lake in the world). It has a see-through and clear skin and doesn’t have a swimming bladder; it can therefore tolerate the high pressures of the deep waters in the lake.

35% of its body is composed of fat. In the past, people would catch it in order to use it as medicine or to use its oil for lighting their lamps.

Also known as a ‘Nerpa’ (Pusa sibirica), this species of seal only inhabits this Russian lake and is the only one of the seal family that spends its entire life in freshwater, although these remain frozen much of the year.

In addition, this phocid is the longest-lived of all this species (a life expectancy of about 55 years) and also the smallest one (no more than 3 ft 7 in–4 ft 7 in long and weighing 139 to 154 lbs). Its skin is dark gray on the mantle and light-colored on the belly. Moreover, it can stay immersed underwater without breathing for more than an hour and feeds on fish and invertebrates.

The snow sheep (Ovis nivicola) lives in the Kamchatka area of northeastern Siberia between the mountains and the coast. They prefer rocky and alpine environments and are extremely skilled and agile for climbing uneven or steep terrain.

It has grayish-brown fur, dark brown legs, and a whitish tail. Both sexes have horns, but the males’ are longer (up to 3 feet in length and 16 inches in circumference). In addition, snow sheep have a life expectancy of around ten years.

This bird belongs to the Gruidae family and is one of the animals originating in Russia that inhabits the area of Siberia. However, as it is a migrating bird, it usually travels long distances (even all the way to Iran, India, and China).

The Siberian crane (also known as the Siberian white crane or the snow crane) prefers wetlands because that’s where the food is. Its diet consists mostly of roots, tubers, and aquatic plant shoots. Even though this bird stands about 55 in tall, when it flies it doubles its size by the length of its wingspan (83–91 in). In addition, it typically weighs between 11–19 lbs.

The Siberian musk deer is a species of musk deer that inhabits the mountainous forests of Russia. It’s a common inhabitant of the Siberian taiga and also places that are above 8,500 feet above sea level. It has a kangaroo-like face and brown fur, allowing it to camouflage very well with the environment around it.

In addition, this herbivore’s diet is mainly composed of lichens even though it has tusks. We should also note that it has nocturnal habits and that, due to poaching, its population has been decreasing, unfortunately.

The white-tailed eagle (Haliaeetus albicilla) is another of these rare animals that live in Russia only, and it inhabits the Kamchatka Peninsula, specifically on the marine coast of Ojostk. Moreover, it’s one of the largest and heaviest birds of prey alive on the planet along with the Philippine eagle and the Harpy eagle. This eagle’s flight is a really fascinating show to behold.

It has a black body except for its wings and lower limbs. Both the bill and legs are a bright yellow color.

Eagles are one of the most impressive birds that live on our planet. What do you think of the ones that live in Russia and are listed in this article? We hope you enjoyed learning about them.

Eurasian Eagle-Owl: Characteristics, Behavior and Habitat
Meet the Eurasian Eagle-owl, the largest nocturnal bird of prey on the planet. They live in many different landscapes, from desers to mountains. Read more »
Link copied!
Interesting Articles
Amphibians
The Common Midwife Toad