This deer, despite having become extinct in some areas of the planet due to the destruction of its natural habitat as well as sport hunting, is not considered endangered. 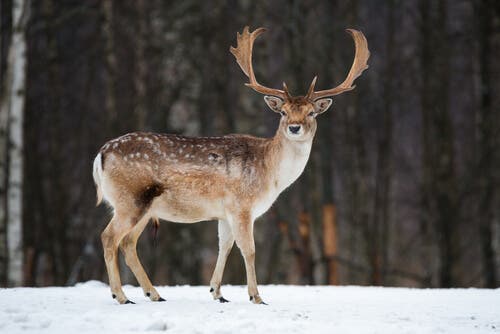 Sometimes referred to as “Bambi” due to the Disney character, the red deer lives in the northern hemisphere. Even with its beautiful appearance, this animal is actually considered one of the most damaging invasive species on the planet. In this article, we’ll tell you about their characteristics, their behavior, and their habitat.

Within the family of cervids, the red deer is the third-largest type of deer. They’re only surpassed by the elk or wapiti. This type of deer reaches over 8 feet in length and over 440 pounds in weight.

Like others of its genus, this mammal presents significant sexual dimorphism. The male is bigger and has horns or antlers that regrow for mating season every year.

In addition, in certain subspecies of red deer, males have a dense, dark mane on their shoulders and neck. In both sexes, their coat is usually brown, except for their stomachs and rears, which are white.

This species can be found in most of the northern hemisphere. In some areas of the planet, it has become extinct due to sport hunting and the destruction of its natural habitat. However, the red deer isn’t considered endangered.

We can divide red deer into two large groups according to location. On the one hand, there are some from Eurasia and Africa. On the other hand, there are some from North America. Those from the first group inhabit Uzbekistan, Algeria, Tunisia, Crimea, Corsica, Sardinia, Pakistan, Manchuria, Tibet, Bhutan, Mongolia, Turkey, Spain, Norway, Sweden, and the British Isles.

The four subspecies that still live in North America are commonly in the Rocky Mountains, Yellowstone National Park, and Oregon, California, and Washington. They are also found in Southern Canada in the region of Manitoba and Dakota.

In addition, these deer were introduced to the southern hemisphere for game reserves in countries such as Argentina, Chile, New Zealand, and Australia. However, in these countries, they are considered bad for the ecosystem. They compete with other herbivores for food. In these cases, their reproduction cycle takes place between March and April.

These deer are more active at sunrise and sunset. This may be because they are quiet and fearful. In addition, their behavior is usually erratic and difficult to follow. They don’t spend more than one day in the same place and sleep wherever they are when night falls.

Males live alone. However, the younger deer generally follow the females. They can travel in herds of up to 20 deer, led by the most experienced female. However, this matriarchy system shares power among the females. In fact, other adult females are responsible for making decisions and defending the group within their territory.

When herds move, these leaders head up the group, and the others follow according to age. In rutting season, dominant males return to the herd.

The mating season runs from August to September. During this time, males fight each other to control the herd. They use their horns that have been developing throughout the year.

During heat, these deer don’t feed. They only copulate or fight. In fact, some may die if they haven’t accumulated sufficient reserves of fat and energy during the winter.

Females are pregnant for eight months. They give birth to one baby at a time in early summer. Shortly after birth, the fawns get up and follow their mothers. However, it’s common to hide the fawns in vegetation. The mothers nurse them several times a day until they’re three months old.

Regarding food, the red deer is herbivorous. They feed on leaves, branches, bark, and roots. Sometimes they may eat fruits or seeds.

Finally, the main predators for the red deer are carnivores, such as bears, tigers, lynx, and leopards. Young deer are most vulnerable. Although adult males have large antlers, they generally don’t use them to fight hunters. Instead, they choose to run away as a method of salvation.