Asian Water Monitor: What Does it Eat?

The Asian water monitor is a large reptile of the monitor lizard family. It inhabits most of Southeast Asia and is a voracious carnivore. 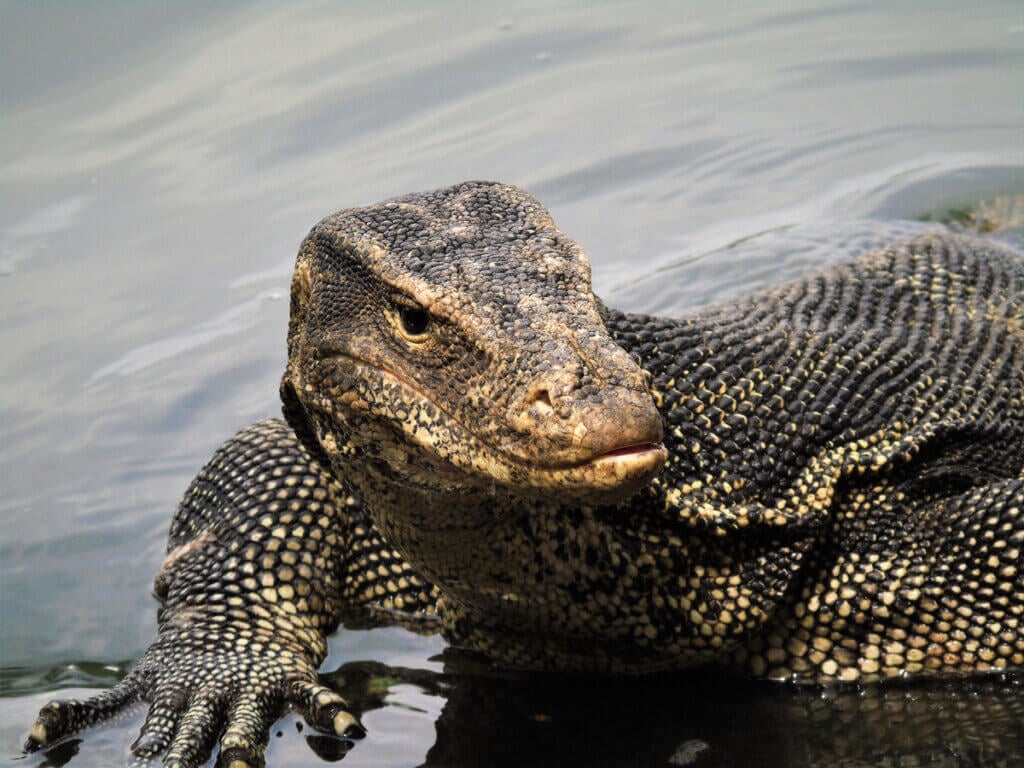 The Asian water monitor (Varanus salvator) is a large reptile of the family Varanidae. An adult specimen can reach a length of more than six feet, making it the second-largest member of its family, after the Komodo dragon.

These majestic reptiles have a wide distribution and morphological variations exist between subspecies in different regions. They’re semi-aquatic reptiles that live in mangroves, swamps, and wetlands, but can also live in rice or palm oil cultivation areas.

This Asian water monitor is usually about 8 feet long and can weigh up to 130 pounds in the wild. It’s dark brown, with yellow and black dots that form transverse chains and tend to become less visible with age.

The body is muscular, as is the tail, which is laterally compressed. It uses its tail to move through the water and intimidate competitors. Asian water monitors have a life expectancy of about 15 years in the wild. However, in captivity, they can reach 29 years of age with proper care.

Unlike their congeners, the Komodo dragons, Asian water monitors aren’t under threat according to the International Union for Conservation of Nature (IUCN). This is because they’ve adapted quite well to human environments.

The Asian water monitor is a carnivorous animal, feeding on a wide variety of prey. These reptiles have the capacity to eat almost anything that can fit inside their stomachs.

Common prey includes birds and their eggs, small mammals – such as rats and bats – fish, crustaceans, mollusks, insects, and other reptiles. In fact, they’re even capable of eating other monitor lizards. Thanks to their sense of smell, these hunters detect prey by scent and pursue them until they’ve captured and devoured them. Finally, they may also consume carrion.

Asian water monitors tend to be solitary and territorial animals. If an individual obtains prey, it must aggressively protect it from other competitors.

When fighting for resources, it’s usually the smaller ones that have the most to lose. Larger and stronger specimens don’t share their food or leave leftovers. In fact, they may violently attack intruders trying to taste their prey.

In recent years, captive breeding of this species has expanded, bringing to the market a range of specimens unique in both personality and appearance. These reptiles are usually smaller than those seen in the wild. But, even so, rearing them can be challenging and, to some extent, irresponsible.

During their first year of life

They’re very hungry animals and grow very fast. It’s best to feed them every day or every other day during their first year of life, which is when they grow the most.

A well-fed lizard may not want to eat for a few days, while one fed with small, frequent feedings may have a constant appetite.

Hatchling diets tend to be primarily insectivorous, with crickets and cockroaches often being a popular choice. In addition to a large and nutritious diet, it’s important to add calcium and vitamin D3 supplementation.

Food for lizards one year and older

As they grow, these animals eat larger prey such as rodents, fish, and small poultry. One-year-old lizards may eat whole prey three to four times per week, while adults over two years of age may be fed less frequently, two to three times per week.

The Asian water monitor is opportunistic and rarely refuses to eat, which means it can be prone to obesity in captivity. This can result in various health problems, which ultimately reduce their life expectancy.

After feeding, reptiles often bask in the sun to aid the digestion of the food. Therefore, in captivity, heat lamps are often used to provide their enclosure with the right temperature and light conditions.


Think before acquiring an Asian water monitor or any type of reptile as a pet, because you need a large terrarium space – especially if the animal is large. What’s more, you must make a heavy investment in equipment to maintain the conditions of its natural habitat, as well as its feeding.

It’s very difficult, for all these reasons and many more, to recommend a monitor lizard as an exotic pet. There are many more viable options on the market that won’t threaten the animal’s life, or your own in the process.

The Emerald Tree Boa: Care in Captivity
Because of its glowing skin and gentle nature, the Emerald Tree Boa is one of the most popular reptiles to keep as an exotic pet. Read more »
Link copied!
Interesting Articles
Reptiles
7 Precautions if You Have a Snake at Home