Meet the Skink: A Snake or a Lizard?

Skinks are animals with elongated bodies, very similar to snakes. However, their physiology is somewhat different. Do you know what these differences are? 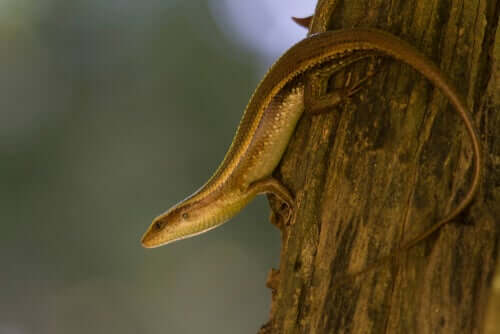 Although its appearance is quite deceptive, the skink is actually a lizard. Most of them are terrestrial and some of them live in trees. However, they usually have more elongated bodies than other lizards, so they tend to be confused with snakes.

The skink feeds on invertebrate animals, mostly insects. However, some of them also eat plants and the larger species feed on vertebrates. Most skinks lay eggs, but there are several ovoviviparous as well as viviparous species.

The Scincidae family are a very varied group, with a lot of subspecies of skinks. As a result, there are more than 1200 of them.

Key differences between lizards and snakes

In order to get to know this animal better, we need to clarify the differences between lizards and snakes. Although both are reptiles, there are some key characteristics that make them very different from each other.

Most lizards have dry, flaky skin. In addition, lizards have four claws and a long tail. In general, lizards have a weak tail; a small blow or pull will break it off. This is a defense mechanism that serves to confuse their predators, which allows the lizard to escape.

However, losing their tail can also be a disadvantage, as it is in this area where lizards store fat. In addition, lizard tails provide stability and balance. Fortunately, lizards can grow a new tail on their own.

On the other hand, we have snakes, which vary in size. They range from pencil-sized African snakes to anacondas large enough to swallow very large prey. They live in almost all ecological niches except polar regions. However, snakes are particularly abundant in tropical regions and deserts.

Snakes, and some lizards, have bifid tongues that work in conjunction with the sensory organs of the palate as environmental scanners. Unlike snakes, lizards have movable eyelids and excellent eyesight.

As we mentioned before, skinks are, in fact, lizards. However, the bodies of these animals have curiously evolved to be more snake-like even though they’re still lizards.

These animals have very small legs and this is the main difference that sets them apart from snakes. In addition, they also have a head that’s slightly raised from the ground and points upwards.

However, they have a very long and conical tail, which can be detached several times throughout their life and will grow back. Skinks that have lost their tails are the ones that look most like snakes.

A large number of studies indicate that their size can vary significantly just as there are so many sub-species of them.

Their sizes can range from just a couple of inches to more than 3 feet long. Nevertheless, their size will, of course, depend on their habitat and the subspecies they belong to.

Geographical distribution of the skink

These animals’ geographical distribution is not specific at all, because there are many different subspecies. They can live in the mountains, savannahs, deserts, and even in the grasslands. However, they can be difficult to find, as they tend to blend very well when in trees.

When they’re buried underground, you won’t be able to find them at all. Occasionally, some people will spot some skinks in human communities. Unfortunately, people usually kill them when they see them because they mistake them for snakes.

The skink’s reproduction is perhaps one of its most curious features. Unlike many other animals, the Scincidae don’t show any kind of motherly affection, so to speak. The female will usually walk away without coming back the moment she lays the eggs or when the young ones are born.

Like other types of lizards, some skinks are ovoviviparous. This means that they carry the eggs inside until they come out of the shell. In addition, some eggs even hatch inside the mother’s body. Nevertheless, as soon as the young ones see the first light, they’re by themselves. The mother doesn’t care for them or help them, the young must find shelter and food on their own.

Something similar happens with the oviparous subspecies of skinks. The mother will create a kind of nest where eggs can be warm and safely away from potential predators.

However, the mother skink will leave the nest as soon as all the eggs are deposited in it. She won’t be around to help the young ones get out of their shells or to encourage their survival in any way.

This species usually spends a lot of time up in trees. They rarely go down to the ground and only do so when they’re struggling to find shelter or food. However, there are also some subspecies that dig underground for protection rather than spending their time in the trees.

The skink tends to be very shy and does well in captivity. For this reason, they’re also usually good pets. However, it’s important to make sure we have the right means to care for them. This includes the specific habitat, temperature, and food they need.

In sum, these animals feed mainly on various types of insects. This may include beetles, crickets, caterpillars and grasshoppers. Sometimes they may feed on small rodents and even other smaller lizard species.

In general, their diet depends on their habitat and what other foods are available to them.

We hope you enjoyed learning about these curious animals! Until next time.

The Pros and Cons of Keeping Lizards as Domestic Pets
More and more people are choosing to keep lizards as domestic pets. While it might seem strange at first, reptiles have been growing in popularity. Read more »
Link copied!
Interesting Articles
Reptiles
Asian Water Monitor: What Does it Eat?