Because of its glowing skin and gentle nature, the Emerald Tree Boa is one of the most popular reptiles to keep as an exotic pet. 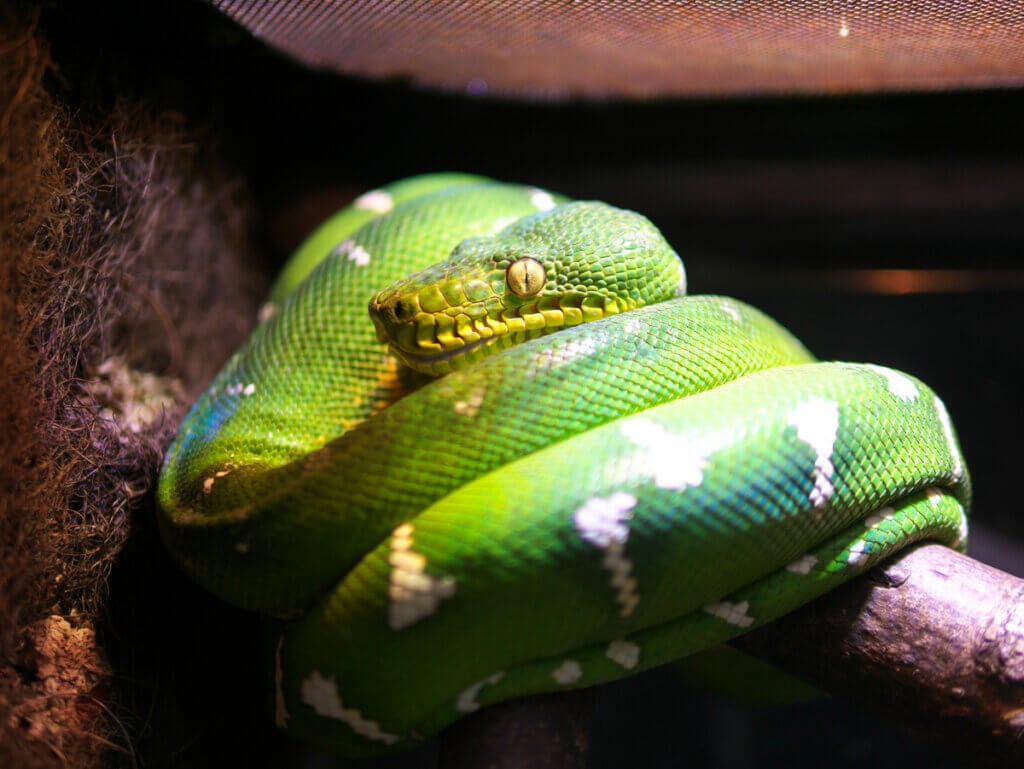 As with any other reptile in the family, heat, light, and the terrarium are key factors in ensuring that this animal grows and lives comfortably. However, before acquiring an emerald boa constrictor, there’s certain information to take into account so as not to break international laws. After this, we’ll tell you everything you need to know to take care of this animal in captivity.

To be sold as a pet, some dealers may collect the emerald tree boa directly from its natural environment. Unfortunately, this type of collection is the main threat to this species.

According to data from the International Union for the Conservation of Nature (IUCN), dealers removed 2365 animals from Guyana in recent times. This is the main country where these snakes are present. Then they went on to sell them as pets in other countries outside Brazil, where its trade is completely illegal.

The emerald tree boa constrictor appears in Appendix II of the Convention on International Trade in Endangered Species of Wild Fauna and Flora (CITES). This means that regulations exist regarding its international sale. As we said, in Brazil, it’s illegal to collect, breed, and sell this snake.

If you want to keep this animal as a pet, you must make sure that it comes from captive breeding. And, what’s more, you need to verify that the country/state where you live allows its legal possession. Buying one of these animals that’s been taken from its natural environment isn’t only an ethical question. It’s a crime in certain regions.

Care of the emerald tree boa in captivity

Emerald tree boas need, above all, a very stable environment in terms of humidity, temperature, and ventilation. Moreover, they’re animals that generate little waste, since they shed their skin twice a year. What’s more, they defecate only every two months, depending on the type of food and the quantity.

What should the terrarium of the emerald boa be like?

The ideal terrarium for an adult emerald boa should be at least 3 feet long and wide and another 3 feet high. These animals are arboreal during the day. So, during the daylight hours, they’ll curl up on a high branch and rest. At night, they’ll move around on the floor of the terrarium actively.

For young animals, a 27-gallon glass terrarium is sufficient. But, as they grow up, they’ll need to move to larger spaces. These animals usually reach a length of about 6.5 feet, although we also know that some specimens have reached nearly 10 feet in their adulthood.

It’s very important to take this factor into account. The emerald tree boa is a large animal. So, if you can’t offer it a proper enclosure when it reaches adulthood, then you shouldn’t acquire one to begin with.

Due to its arboreal behavior, the terrarium should have several resistant and thick trunks placed at different heights, to facilitate the snake’s rest. In addition, at least one of these trunks should be supported inside the enclosure for bathing. We’ll explain the reason later on.

With respect to the substrate, this can consist of newspaper sheets or washable reptile liners. But remember, although they’re easier to clean, these don’t help the snake when it molts. So, it’s better to place a substrate of mulch and dry leaves. When the snake molts, moving over the substrate will help it shed its old skin.

Environmental parameters in the terrarium

The emerald boa comes from tropical regions and therefore likes heat and humidity. However, excessive heat can be bothersome. So, it’s best to design a terrarium where the animal can move around if it needs more heat or cold.

In this sense, you could place a heating strip in the upper part of the terrarium. Heat always tends to rise and cold to fall. Therefore, if the snake’s cold, it’ll climb up to the high branches and, if it feels hot, it’ll climb down to the low branches or to the ground.

The temperature should remain at a constant 80.6°F during the light hours 69.8 °F at night. To do this, having a thermometer and installing fans is essential to maintain this balance inside the installation.

When setting a light-dark schedule, you can place a common bulb that doesn’t produce and control it with a timer. The day should have 12 hours and the night another 12. With regard to UV light, although it’s not essential, if you want the animal to look as beautiful and luminous as possible, then this is your best bet.

Finally, the humidity level should be between 60% and 70%. You can use a hygrometer to determine the humidity of the enclosure. As it rains every day in the forests where these snakes originate, you should spray the terrarium with water every day or install a humidifier.

This snake will hydrate itself through its scales or drink the water drops left on the walls of the tank. In the same way, it often visits the bath to hydrate itself or to defecate. To facilitate and encourage the snake to use the bath, you should place a branch that ends inside the water enclosure itself, as we said at the beginning.

Between nebulizations, you should allow the tank to dry out completely. Excessive humidity can lead to fungus in the terrarium, as well as infections in the snake’s skin.

How to feed an emerald tree boa

The best food for the emerald tree boa in captivity are rats. You can obtain this food through breeders on the internet or visit specialized shops. The rats come frozen and should remain so until it’s time to offer them to the snake. Of course, you’ll need to defrost them first.

In order to feed the boa properly, you need to know its age and sex. Adult females will eat a medium-sized rat – between 5.25 and 6.25 ounces – every 3 weeks. Males will follow the same feeding pattern, but the rat should be smaller – between 2.6 and 4.4 ounces.

It’s important to adhere to these parameters especially since you should never overfeed an emerald tree boa. These animals should be thin so that they can easily climb up the trunks. Once you’ve fed the snake three times, you shouldn’t offer it any more food until it’s defecated.


As you can see, having an emerald tree boa as an exotic pet may not be much of a daily chore, apart from having a large terrarium and maintaining temperature and humidity. The only thing that’s essential when it comes to obtaining one is to never buy it from an unknown supplier who may have trafficked a specimen taken from its natural environment.
The Effects of Illegal Trade on Animals
The illegal trade is a business that exists since prehistoric times, and unfortunately causes a serious impact on Earth's fauna and flora. Read more »
Link copied!
Interesting Articles
Reptiles
Asian Water Monitor: What Does it Eat?