The Many Types of Non-Venomous Snakes

Non-venomous snakes often have mechanisms other than toxins to evade predators and hunt their prey. 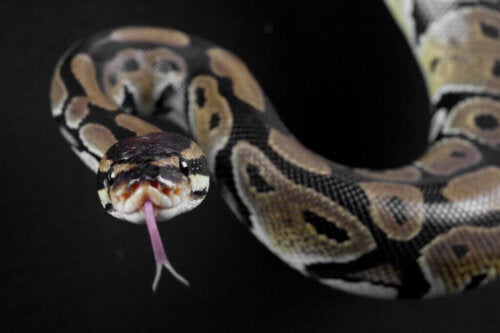 When we think of snakes, we often envision an elongated animal with a scaly body, a large jaw with the ability to unhinge, and large, sharp fangs that spit out the venom. However, many snakes are non-venomous and not all venomous ones can significantly harm a human.

Snakes, or ophidians, are classified into more than 3,400 species in about 450 genera. Only 15% of them are venomous, and within this group, only 20% of them pose a threat to humans.

Most snakes are non-venomous

There are many types of non-venomous snakes and these are distributed among different groups of snakes. Venom is an effective method for immobilizing or killing captured prey but it isn’t the only one in the world of predators.

For example, boas strangulate their prey. In fact, they wrap their strong body around their usually large victims and smother them with their powerful muscles before feasting on them.

There’s no single method to distinguish venomous snakes from non-venomous ones but there are certain generalities that allow us to estimate the danger of an ophidian:

Keep in mind that these aren’t general rules so don’t rely on these characteristics. Detailed knowledge of the different species is what will allow you to differentiate a venomous snake from one that isn’t.

It’s common to designate non-venomous snakes as Colubridae; however, the term refers to a specific family of snakes. Thus, it isn’t a completely valid way to differentiate these animals.

Here are some of the more recognizable non-venomous types of snakes, but not the only ones.

Boas are a family of constricting snakes. They kill their prey by coiling their muscular body around them. These animals inhabit tropical areas of South and Central America and are excellent swimmers. They prefer dry land though, hollow logs, or abandoned burrows in particular.

One of these snakes can measure up to 13 feet and weigh more than 100 pounds. Depending on the habitat in which they’re camouflaged, their body may be brown, green, red, or yellow, with cryptic patterns formed by irregular lines, ovals, diamonds, and circles.

Pythons also have a constricting nature and look very much like boas. There are important differences between both groups, however, such as the way they reproduce. For instance, pythons are oviparous (lay eggs), while boas are ovoviviparous (keep the egg inside and give birth to their young alive). They also live in different parts of the world.

This family of animals includes approximately 1800 different species with a worldwide distribution. Most species are non-venomous but some of them are, and could be dangerous to humans who want to touch them.

Generally, snakes are diurnal and their pupils are round like their head. They have large scales. There are exceptions among them, such as the natricine water snake (Natrix maura), which imitates the physique and behavior of venomous snakes.

Many species in the animal world take advantage of the appearance of venomous animals to confuse their prey and predators. This evolutionary phenomenon is known as Batesian mimicry.

The false coral snake is a great example of this but it isn’t venomous. However, such is the degree of imitation, that one must know what the specific patterns of their skin are, in order to differentiate them.

Coral snakes have red and white or yellow tones in a row. In contrast, the false coral snake has white and yellow colors between the black stripes, which gives it a red-black-white or yellow-black-red pattern.

As you can see, venom isn’t the only form of protection and hunting method in Ophidia. Many snakes fend for themselves without the help of toxic agents that range from a rather powerful musculature to perfect mimicry.

Latin America’s Most Venomous Snakes
Take a look at some of Latin America's and the world's most venomous snakes. From the well-known rattlesnake, to the less known Malayan Krait. Read more »
Link copied!
Interesting Articles
Reptiles
Types of Lizards in the Animal Kingdom