The Snub-Nosed Viper Outlasts the Myths

The snub-nosed viper inhabits the Iberian Peninsula and North Africa. Despite its bad reputation, when detected, it opts to escape and doesn't normally pounce to attack. 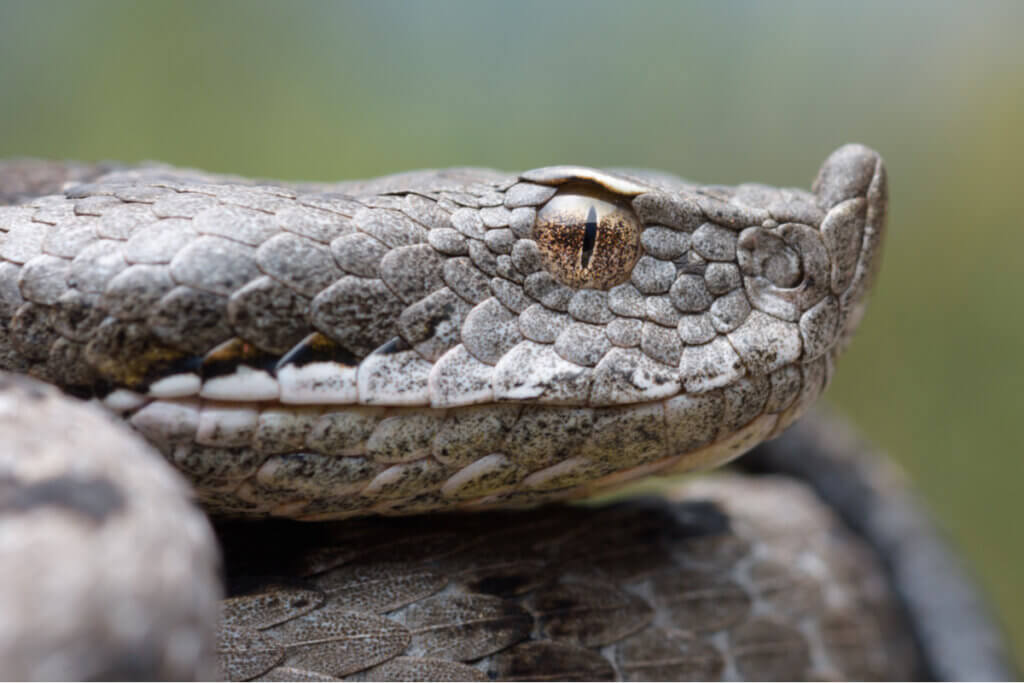 The snub-nosed viper (Vípera latastei) is a species typical in the regions with a Mediterranean climate. Hence, this animal is found in the Iberian Peninsula and in North Africa. This snake owes its name to an appendix on its head, which gives it a curious snub-nosed appearance.

This species is of medium size, and, although shy, when threatened it flares its neck to appear bigger. In case the danger persists, the animal won’t hesitate to attack. If you want to know more about this deadly, but fascinating, reptile, read on.

How to recognize the snub-nosed viper?

The first notable thing about this animal is its triangular-shaped head, which is very well differentiated from the body. In addition to its typical “snub nose”, it also has penetrating eyes with yellow or golden iris. Let’s remember that vipers, unlike snakes, have a vertical elliptic pupil.

As for the body, it’s relatively thick, and the tail is proportionally short. The maximum recorded length is of 73 centimeters (28 inches), but most individuals range from 50 to 60 centimeters (20 to 23 inches)

It’s important to note that the pigmentation is less varied than in most other European vipers. Thus, the background color of this reptile ranges from dark ash-grey to brown. On the back side of the head, it often has two oblique dark strips, which can join to form an inverted V. Finally, it displays a typical zigzag pattern on its back.

In contrast to other snake species, there’s a low level of sexual dimorphism in the snub-nosed viper.

What to expect from the bite of a snub-nosed viper?

The bite of this viperid is relatively serious. Even if the toxicity of the snub-nosed viper’s venom is lower compared to other European vipers, the amount of injected venom is substantially higher.

In a study on the frequency of viper bites among humans in Spain, a total of 125 cases were reported between 1965 and 1980. The annual mortality rate on account of this reptile is between three and seven people, very low but far from negligible.

Where does the snub-nosed viper prefer to live?

This is a species typical of humid, sub-humid and semi-arid Mediterranean climate regions. It prefers dry rocky areas covered by thicket, but also forests, steep slopes and stone walls with some vegetation to separate it from crop fields and meadows.

Throughout the year, vipers most commonly inhabit open forests and thickets. However, in summer, they move close to riverbanks, and spend the winter in areas with less open forests.

Generally, both in the Iberian Peninsula and in North Africa, the snub-nosed viper has a discontinuous distribution, with dispersed and isolated nuclei of moderate and low density.

The main factors threatening the snub-nosed viper population include:

The snub-nosed viper threatened by persecution and ignominy

Since time immemorial, man has persecuted snakes due to their bad reputation as dangerous and disgusting animals. Moreover, they have been the theme of all sorts of fake myths and legends.

On the other hand, they’re subject to the illegal trading induced by collectors and superstitious individuals. In Portugal, the snub-nosed viper is caught and marketed for superstitious reasons. As a result, their heads are sold as amulets. Furthermore, there are references that this practice dates back to the Middle Ages.

The main anti-predator strategy of the snub-nosed viper is mimicry. To this end, its ash grey pigmentation with a dorsal zigzag strip provides excellent camouflage. This pattern is especially useful in thickets of heather, gorse, and broom.

On the other hand, its typical sedentary and very discreet behavior also helps it to go unnoticed. When detected, it opts to escape, but once captured or cornered, it emits menacing hissing and can bite vigorously.

As we can see, not all prejudice is substantiated. Like all other animals, vipers are trying to survive, and only attack when they have no other choice. We must overcome these unjustified fears, because respect towards all living beings —however dangerous they may seem to us— is essential for the preservation of biodiversity on the planet.

10 Cold-Blooded Animals from Around the World
Unlike mammals, cold-blooded animals need sunlight and other heat sources to maintain the right temperature. We'll tell you more about them in this article.  Read more »
Link copied!
Interesting Articles
Reptiles
Asian Water Monitor: What Does it Eat?