The most striking of the sexual peculiarities of animals, to say the least, is that of the species that eat their mate after copulation. There's also the case of the male that becomes pregnant after the female gives birth. 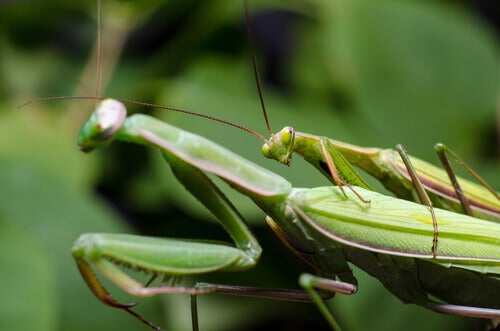 Nature is amazing and we often can’t understand the habits of certain species because they’re different from us, their sexual peculiarities, for example. Continue reading to find out more about some of them – they’re really strange!

Examples of sexual peculiarities in animals

How would you feel about eating your mate after sex or courting someone for a whole day? There are several sexual peculiarities in some animal species that seem outrageous from a human point of view. We may never understand them but they’re definitely worth learning about. Check out the following examples:

This vibrant green insect with an elongated body and bulging eyes spends its entire life alone, except during the breeding season, as happens with many species. What really sets the praying mantis apart from other animals is that the female eats the male after sex!

She secretes pheromones to attract her suitor and waits for him to arrive and surround her with his strong antennae and long, sculptural legs.

The female is quite aggressive during the act and sometimes devours the male alive. Nobody knows why yet. She does so by munching on his eyes and then does the same with the rest of his body. She leaves the sexual organs for dessert.

This animal belongs to the genus of the hippocampus and people consider them synonymous with faithfulness and eternal love. However, the ability of the male to get pregnant is a well-known fact. Indeed, they’re also in charge of taking care of the young when they’re born.

Seahorse reproduction takes place when the water temperature rises, and after a ceremonial dance in which a male and a female intertwine their tails.

So far it seems to be quite romantic, but fertilization takes place externally (in the water), and, after that, the female deposits the eggs in the womb of her partner in record time: only six seconds.

The male seahorse gestates their young for up to six weeks and gives birth to them over a period of several hours. Another interesting fact: the fry can move in and out of the father’s belly during the first few days if they sense danger.

Let’s not leave the ophidians off the list of sexual peculiarities in some animals. This is because the males have two penises instead of one. These sexual organs are inside their body and only come out to play during reproduction thanks to specific erectile tissues.

The most striking part is they don’t use them both at the same time but choose depending on the situation. Note that copulation in snakes can go on with one female and several males.

Therefore, the one who’s more effective will end up fathering the offspring. The penises of snakes often have spines or hooks in order to anchor her to them.

4. The sexual peculiarities of the dabbling duck

The vast majority of male birds don’t have an external reproductive organ (as in mammals and certain fish). Instead, they have an orifice known as a cloaca.

The dabbling duck is the exception though; it’s a species native to South America that doesn’t only have a penis but actually holds the record for being quite well-endowed. This is because it’s the longest of all vertebrates — in relation to the individual’s body.

That’s not all, given that its shape is one of the greatest sexual peculiarities in animals: it’s a kind of ‘spiral’ whose purpose is to clean away the sperm of previous copulations that the female has had. She can mate with different partners during the reproductive season.

Finally, we’ve just talked about the birds so let’s now talk about the bees! Indeed, their sexual lives are rather peculiar as well. This is because only queens can reproduce (worker bees are barren females) and copulate with the drones (males) whose main purpose in life is to meet her every whim.

Furthermore, the queen can mate with up to ten drones in a single season, but only the strongest and most beautiful will father her offspring. The bad news for him is that he’ll have to leave his testicles behind after implanting them in the female and detaching from her body!

What Is Asexual Reproduction?
In asexual reproduction there is only one progenitor. Species practicing this type of reproduction separate a part of their body to perpetuate the species. Read more »
Link copied!
Interesting Articles
Wild Animals
5 Animals that Live in Grasslands