The Seahorse: Hippocampus of the Sea

Physically, you could say this animal is kind of a mix of different specimens since they are fish with the head and snout of a horse, the prehensile tail of a monkey, the pouch of a kangaroo, and the eyes of a chameleon. They inhabit warm and hot tropical waters. 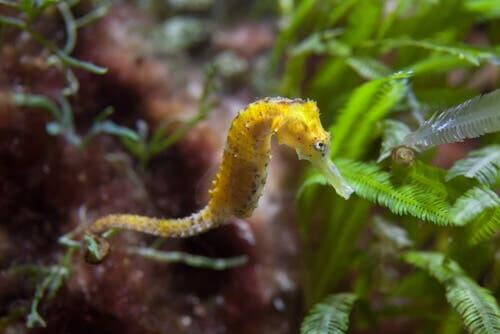 The name Hippocampus comes from two Greek terms. “Hippos” means horse and “kampos” means sea monster. These combine to form the scientific name of the seahorse. In this article, we’ll tell you everything you need to know about these creatures, which are truly fascinating animals.

Characteristics of the seahorse

There are more than 50 known species of seahorses. However, these animals are very different fish compared to other species. To begin with, these animals move vertically and look as if they’re standing. Then, they propel themselves with their back dorsal fin and pectoral fins, which are behind their heads.

Another characteristic of this species is that they’re covered in a type of “armor” of rings of thick plates. These can help with camouflage because they can change color when among algae. This technique is essential when hiding from predators.  Seahorses only grow up to 12 inches. However, the smallest are only half an inch; their size makes them slow swimmers.

These animals have gills and communicate with others by “clicks” they make through head movements. They also filter water through their nostrils.

Habitat and feeding of seahorses

This animal inhabits shallow tropical waters with warm and hot temperatures. They live in between coral in both the Atlantic and Indo-Pacific oceans, as well as the Red Sea.

As for food, these animals feed on small invertebrates. They also rely on their eyes, which can move independently, to recognize prey. Then, their elongated snout and quick head movements allow them to “suck” up the food and swallow it whole. In fact, they never chew their food because they don’t have teeth.

However, because their stomachs are so small, they have to consume large amounts of food consistently.

Undoubtedly, one of the reasons why these animals are known throughout the world is for their “reverse” reproduction.

First, when the water temperature rises, the male and female perform a ceremonial dance and intertwine their tails. After 20 minutes, external fertilization occurs.

Then, they start an extraordinary process. The female transplants the eggs in a pouch on the male’s belly. There, the eggs are well protected and begin to develop. The entire process of transferring takes only six seconds. This aims to guarantee genetic monogamy. The offspring will be the product of just the two seahorses.

Gestation can last between 10 days and 6 weeks, depending on the species and the temperature of the water. After that time, the male uses their tail to cling to something on the ocean floor. Then, they contract their bodies to free the young. This “birthing” process can take several hours. The babies are identical to the parents, but are only a maximum of one centimeter (0.4 inches) long.

Each litter can be from 10 to 400 babies. During their first days of life, these babies can enter and exit the father’s pouch, depending on whether there’s any danger.

As you can see, seahorses are a bizarre mix of several animals at the same time. They’re fish with the head and snout of a horse, the prehensile tail of a monkey, the pouch of a kangaroo, and the eyes of a chameleon. And they also move upright like humans! Incredible!

6 Interesting Facts About Fish
Our seas and oceans are home to some of the most fascinating creatures on our planet. Today, we're going to tell you some interesting facts about fish. Read more »