Sea snakes are classified into two groups. They present morphological adaptations for their correct development and survival in the aquatic environment. 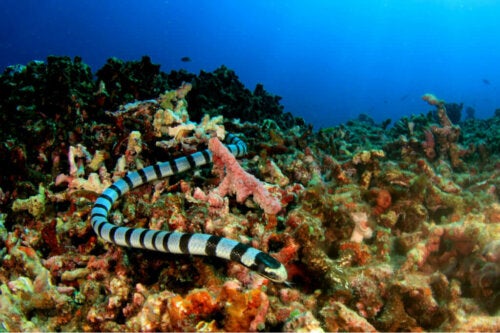 Sea snakes, or coral reef snakes, are a subfamily of reptiles that are totally adapted to aquatic life. Most of them are vulnerable on land, and rarely come out of the water as their bodies have adapted to swimming, making crawling difficult. The classification of sea snakes indicates that they make up the family of the most poisonous snakes in the world (Elapidae).

This family also includes their congeners: cobras, mambas, and coral snakes. If you want to know more about these fascinating animals, read on.

Sea snakes, but not Atlantic snakes

These snakes have adapted to marine life. Even though the Caribbean regions would be an ideal habitat for these animals, they don’t live in the Atlantic Ocean.

These reptiles live in the Pacific and Indian Oceans, from Japan to New Zealand and from South Africa to Central America. It’s believed that their absence in the Atlantic is due to the fact that they’re physically unable to reach that region. It seems that the Isthmus of Panama acts as a geological barrier that keeps them away from the Atlantic.

In any case, this hasn’t prevented the proliferation and spread of sea snakes. This group presents a great biological diversity, and the classification of sea snakes includes approximately 62 species pertaining to 17 different genera. The Hydrophis genus is the largest among them.

There are two subfamilies of sea snakes:

We’ll now examine each of these two major categories.

Hydrophis, the largest group in the classification of sea snakes

Sea snakes present great anatomical differences with respect to their terrestrial counterparts. For example, all of them have a flattened tail in the shape of a paddle —which helps them swim— and their bodies are laterally compressed, like that of an eel.

The adults of most species in this subfamily reach between 120 and 150 centimeters (47 to 59 in) in length. However, the largest specimens can reach up to 3 meters (10 ft) in length, like the adults of the species Hydrophis spiralis.

Unlike land snake species, which have imbricate scales to protect themselves from abrasion from the ground, the scales of most pelagic sea snakes don’t overlap.

This is a general rule, save for some species that inhabit the coral reefs, which do have imbricate scales with which they protect their body from the abrasion caused by the coral reef on their skin.

The Hydrophis are carnivorous, they feed on fish —especially eels— but also on mollusks, crustaceans and even fish eggs. To hunt, they inject their venom into their prey, which dies soon after due to its toxic effect.

Another difference between the subfamily Hidrophis and other snakes is their reproduction. This subfamily includes ovoviviparous individuals, that is, their young develop and hatch inside the mother. Usually, they give birth to 7-9 offspring. However, there are exceptions of certain species with very numerous offspring.

The venom of the sea snakes is very powerful and exceeds that of cobras, as it’s a mixture of neurotoxins and myotoxins. The sea snake is one of the most venomous species, but bites in humans are rare, and are probably due to humans disturbing them, as this species is quite peaceful.

Amphibian snakes of the genus Laticauda

These are also sea snakes, even if, in this case, they don’t spend their entire life in water. Their habits are aquatic and terrestrial, and, in fact, they reproduce on land. Unlike the specimens of the other subfamily, the sea kraits are oviparous, laying their eggs on land.

The nostrils of the laticaudas are situated laterally, while the rest of the sea serpents have them on the upper part of their snout, which they bring to the surface to breathe. Sea kraits can close their nostrils with valves when they dive.

All members of this subfamily have ventral scales, which protect them in their movements on land.

The yellow-lipped sea krait, also known as banded sea krait (Laticauda colubrina) is one of the most representative species. It inhabits the tropical waters of the Indo-Pacific. Furthermore, it stands out due to its long body —almost cylindrical— with uniform black and silver stripes.

As we’ve seen, the classification of sea snakes divides them into two major subfamilies with different traits. These ophidians have developed some incredible adaptations to the aquatic environment.

Snakes in Ancient Cultures
While many people are afraid of snakes, these animals were actually revered in the past. We'll tell you about snakes in ancient cultures. Read more »
Link copied!
Interesting Articles
Reptiles
Boa Constrictor: Characteristics, Behavior, and Habitat