Closely linked to the cobras, the sea snake differs from its terrestrial relatives in that its body is adapted to withstand immersion in deep waters. 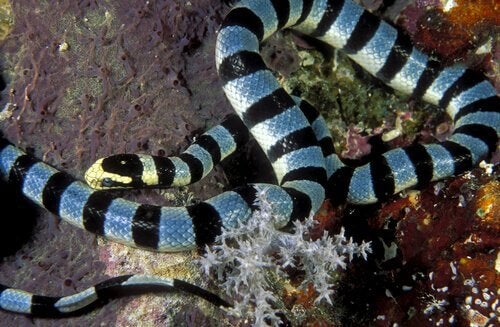 Sea snakes, also known as coral reef snakes, are paradoxical creatures. Some people even enjoy swimming near them, even those who wouldn’t get close to this animal’s land snake cousins.

On one hand, they have the reputation of being peaceful animals that only attack in self-defense, and with which people can interact while diving.

At the same time, these coral reef snakes are highly poisonous. More than any other type of snake, in fact. These beautiful creatures are related to the Australian land snakes and, unlike the purely aquatic animals, sea snakes come up to the surface to breathe regularly.

These snakes have a unique adaptation to the aquatic realm in their ability to absorb oxygen through the surface of their skin. They can, in fact, satisfy up to 25% of their oxygen needs this way.

Another evolutionary trait is how sea snakes deal with salt. They’re originally terrestrial animals and can’t tolerate high levels of salinity, like other marine creatures. However, the sea snakes have developed special glands under the tongue, and around it, and this allows them to remove the excess salt from their bodies.

The final evolutionary trait reflected in sea snakes is in their scales. Most land snakes have overlapping scales designed to protect their body from constant soil abrasion.

Sea snakes don’t need that kind of protection and so their scales are soft and don’t overlap. They’re designed to be hydrodynamic, and to act as armor against sharp corals.

Sea snakes live all over the world in warm and temperate waters. Like most reptiles, they dislike cold weather. It’s possible to find them in tropical waters from the Caribbean to Australia, and also on the east coast of Africa.

Interestingly, for reasons that are not quite understood, the only bodies of water not inhabited by this species are the Atlantic Ocean and the Mediterranean Sea. This is despite the fact that both are warm enough for sea snakes to withstand.

This is particularly curious because, for some unknown reason, sea snakes are not willing nor able to cross the Panama Canal or the Suez Canal, unlike many other species that have completed this crossing.

The sea snake, like its land cousins, is venomous. It doesn’t bite very often, but when it does it certainly makes up for it! Unlike land snakes, when sea snakes bite they don’t inject large amounts of venom.

Due to the small amount of venom, the initial bite is often painless and the symptoms don’t appear immediately. However, in spite of the small volume of toxin delivered by the bite, it’s dangerous due to its potency. If left untreated, death could occur 8 to 12 hours later.

The most common myth you’ll hear about sea snakes is that, because of their small fangs, they can only bite a diver on the earlobe and on the skin area located between the thumb and the forefinger.

This is a complete myth. Most marine snakes are docile and timid by nature, and many fishermen are seen uncoiling them from their nets and returning them to the sea. But the sea snake’s lack of aggressiveness shouldn’t be confused with a lack of ability to do so.

The sea snake can bite and penetrate exposed human skin and, as most are venomous, it could result in death if not treated in time.

The favorite food of this ophidian species is fish, which get swallowed whole. It also feasts on eels and crustaceans, and some of them eat fish eggs.

The coral reef snake is an ovoviviparous species. The eggs develop inside the mother’s body until they are about to hatch. Only the Laticauda genus is oviparous and lays its eggs on the ground.

Young sea snakes are born alive in the water, where they complete their entire life cycle. In some species the offspring are quite large – about half the size of their mother’s body sometimes. The offspring of sea snakes become independent at birth. This is one of the few animal species that doesn’t require maternal care.

Do Whales Experience Stress?
Did you know that whales experience stress? In this article we'll look at evidence from World War II that clearly shows this. Read more »

Animals
Why You Shouldn't Have a Raccoon as a Pet

Adopting pets that are less “conventional” than a dog or a cat is trendy. Many people are embarking on the…