Home » Animals » Wild Animals » Tawny Frogmouth: Everything You Should Know

Tawny Frogmouth: Everything You Should Know

The tawny frogmouth is a bird with narrowed eyelids and a stretched neck. It uses its bark-colored neck to camouflage itself. We'll tell you all about him here. 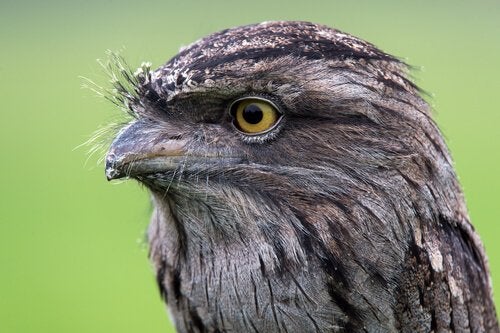 The tawny frogmouth may look like an owl at first sight, but it’s actually a completely different type of bird. They live throughout Australia and in all types of habitats. Its beak is designed to catch insects such as cicadas and beetles. Additionally, it occasionally feeds on small rodents and frogs.

Unlike the owl, the tawny frogmouth cannot fly very well. This species will wait silently for its prey to approach, pounce on it, and return to its position. They rest on old trees with thick, dark bark because it makes them almost invisible.

Morphology of the tawny frogmouth

Generally, the tawny frogmouth’s plumage is silver gray, slightly paler underneath and speckled with black. There’s also a second species with reddish plumage. Their eyes are yellow and they have olive gray to black beaks.

The tawny frogmouth is a night owl. During the day, they perch on branches and camouflage themselves as part of the tree; they tend to communicate with a soft, deep and continuous sound. Additionally, they make a loud whistle when they feel threatened.

This species has a broad, flat beak, unlike the owl, whose beak is narrow and more hooked. Its claws are weak and they aren’t curved as other birds’. In the winter, their food supply will reduce so much that they’ll spend many of their days and nights in torpor.

This state of torpor is similar to hibernation, in which the heart rate and metabolism decrease sufficiently in order to conserve energy. On colder days, especially in the fall and winter, they’ll stay in a sunny place on the north side of the tree, while in the summer they usually choose a place facing south.

The tawny frogmouth has a regular breeding season, but birds in more arid areas can breed in response to rains. Additionally, this bird chooses a companion for life. The couple will usually produce two eggs together each year, and will take turns sitting on them and keeping them warm until they hatch.

They make their nests using loose sticks, which are usually placed on a horizontal bifurcated tree branch. One of the best times to see them is at sunset during the fall. That’s because they’ll be out and about eating as many insects as they can before they begin to hibernate.

During the day, their wonderfully designed feathers mix with the bark of the trees, which makes them very difficult to detect. Their feathers aren’t their only unusual feature; they also have a large wide beak which is where their name ‘frogmouth’ comes from.

These birds love catching insects in the air at night. They also eat slugs and snails, and even small mammals like mice. It’s a great animal to have in your backyard because, while you sleep, they’re busy keeping any pesky bugs that are in your garden at bay.

If the frogmouth feels scared, it will raise its head in the air and close its eyes. For anyone who sees it, it will just look like a tree branch. They hope that while they have their eyes closed, whatever they’re afraid of won’t be able to see them and they’ll just go away.

If a frogmouth is disturbed, it’ll take on a threatening posture. It’ll ruffle its feathers, show its wide orange eyes and open its beak to show off its yellow throat. They do this in the hope of intimidating the predator.

Even though they’re known as one of the deadliest looking birds in Australia, the tawny frogmouth is one of the most beloved species on the continent. 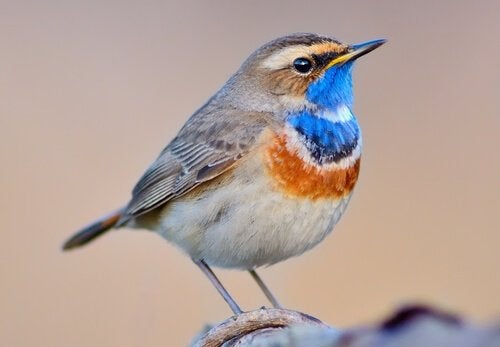 Bluethroat Nightingale: All About this Wonderful Bird
Not only does the bluethroat nightingale have striking colors, but it can also emit sounds that imitate those of other species.  Read more »