The Fauna of the Pyrenees

More than 200 species withstand the harsh terrain and climate along the 430 kilometers of mountains, including reptiles, amphibians, birds and mammals. 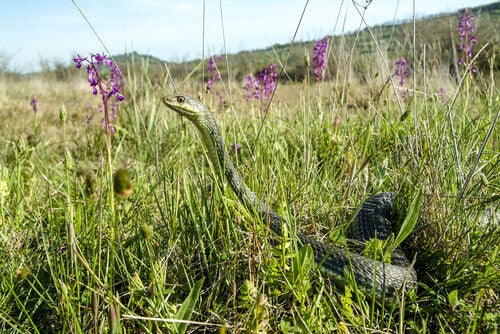 Because its rugged terrain is exposed to little human impact, this mountain range located between Spain, Andorra and France is home to hundreds of animals. In this article, we’ll teach you all about the fauna of the Pyrenees.

What animals make up the fauna of the Pyrenees?

The Pyrenees are almost 430 kilometers of mountains in the north of the Iberian Peninsula and are home to nearly 200 animal species, including mammals, birds, reptiles and amphibians. The fauna of the Pyrenees can withstand the adverse conditions of the terrain and climate, and local efforts increasingly discourage the capture and hunting of animals. Among the most characteristic species are:

The Montpellier snake–like the one in the image at the top of this article–is a scaly and venomous reptile whose injecting teeth are located at the back of its mouth; they’re not considered dangerous to humans. Adult males are over six feet long, have large eyes and protruding gray or brown scales that help them blend in with the environment.

In fact, this snake is one of the most common species among the fauna of the Pyrenees, and is famous for its speed and aggressiveness. It feeds on small mammals, lizards, birds and ophidians. It breeds between April and May, and each year the female lays a maximum of 18 eggs.

This goat-antelope is also known as the ‘sarrio’. It’s smaller than the ibex and lives in mountainous areas of the Iberian Peninsula. Both sexes have horns, although those of the male are thicker and the hook is more closed.

The Pyrenean chamois has a light-colored neck and head, a dark brown coat and two dark spots around the eyes, like a mask. It breeds between October and November after a fight between males. Gestation lasts 20 weeks and each litter consists of only one offspring.

The bearded vulture is very different from other birds of prey, as it has the habit of breaking the bones of its prey against rocks and then eating them. However, it’s a highly endangered animal, having disappeared from several of its natural habitats. It prefers cliffs and ravines, cave areas for nesting, and areas where it can find carrion and its main food, bones.

Bearded vultures can have a wingspan of up to ten feet and weigh about fifteen pounds. Interestingly, their heads are covered with feathers–another difference with other vultures–and the color of their plumage varies with age. As chicks, they’re brown; it then goes lighter when they’re up to three years old, gray up to six years old, and then yellowish-white after seven years of age.

The Lagopus muta species has more than 20 subspecies; one of them (pirenaicus) lives in the Pyrenees. Luckily its population is stable due to a lack of threats such as predators and human hunting.

The ptarmigan is about 14 inches long, white and gray in winter and brown in summer. It has dense plumage even on its legs, and lives in small groups of up to six birds; these groups move throughout the mountains in search of food or shelter. Each season, the females can lay between 6 and 10 eggs.

One of the most famous members of the fauna of the Pyrenees, this rodent is the largest in Europe and looks like a squirrel. It measures about 24 inches – another 8 inches including its tail – and its body is covered with thick brownish-gray fur.

Alpine marmots spend hours sitting with their front legs close to their mouths; they form colonies in burrows in winter to insulate themselves from the cold while they hibernate.

All About The Amazing Great Pyrenees
Today we're going to talk about the Great Pyrenees dog breed, it's one of those striking creatures you can't stop looking at when you come across them. Read more »
Link copied!
Interesting Articles
Amphibians
The Differences Between Toads and Frogs