What to Do if You Find an Injured Wild Animal

You have to make sure that the animal is indeed injured. Many people take animals that don’t need veterinary attention to animal recovery centers. In this article, discover what to do if you find an injured wild animal. 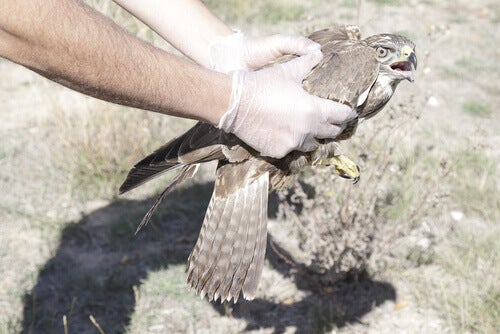 While you’re hiking or simply enjoying nature, you could easily find an injured wild animal in serious trouble. Although it’s a complicated situation, it’s best to stay calm and follow the tips we share in this article to help it out.

Are you sure it’s an injured wild animal?

Every year, thousands of uninjured animals arrive at wildlife rehabilitation centers. This condemns them to live in captivity due to sheer ignorance.

For example, just because some animals don’t fly and are alone doesn’t mean they’re injured or need help. Some birds are nesting birds that leave the nest before learning to fly. However, that doesn’t mean that their parents aren’t keeping an eye on them.

It’s best to reach out to an expert or wildlife rehabilitation center that can identify the bird species to make sure that the hatchling isn’t an orphan. Also, it’s usually a good idea to look for the nest. However, most people don’t have a trained eye for this task.

Most wildlife rehabilitation centers are full to the brim. Thus, it isn’t uncommon for them to reject some non-threatened species, such as pigeons or swallows, in order to accommodate others, such as the imperial eagle or the bearded vulture.

That’s why it’s a good idea to make sure that the hatchling is alone before taking it, as you’ll be doing it more harm than good.

On the other hand, other species may seem injured when they’re young, as is the case of some cervids such as the roe deer or the common deer. Roe deer and other wild hoofed animals leave their young hidden in the undergrowth after licking them to eliminate their scent. On many occasions, people find them and believe they’ve been abandoned, even though their parents are close by.

The first step is to call a wildlife rehabilitation center

Before intervening in any way, and unless the injured wild animal is in serious danger that you could prevent without putting yourself at risk, it’s a good idea to call a wildlife rehabilitation center. The experts will tell you what to do.

In fact, it’s a great idea to look up the wildlife rehabilitation centers near you and to save their phone numbers and other contact info in your cell phone. After describing the case, they can tell you how to intervene to help the injured wild animal.

Normally, when you call a wildlife rehabilitation center, they’ll be able to tell you what to do. They may ask you to stay near to the animal, but without bothering it. After that, they’ll ask you for your location so you can tell them where the injured wild animal is once they arrive.

You could also take the animal to the rescue center yourself. If you’re going to go this route, it’s enough to pick it up carefully and wrap it up in a towel. Then, cover its head and put it in a cardboard box or carrier.

If it’s late and the animal must spend the night at your house, then, if it’s a small bird, there shouldn’t be any problem. Although you can try giving it some water, it’s best for it to be fed at the rehabilitation center. Homemade recipes such as bread with milk are dangerous and harmful for these animals.

If there’s no rehabilitation center nearby, you can choose to take the injured wild animal to an exotic animal clinic. However, you must understand that they may charge you for their services, although they may give you a discount so that you can afford the care.

Rescued Animals – Caught in the Forest Fires
Forest fires are frequently in the summer news. In August 2020, a major one in California led to the rescue of over 1000 animals. Read more »
Link copied!
Interesting Articles
Wild Animals
8 Helpful Tips for Observing Wildlife