In this very interesting article, discover some brachycephalic dog breeds. Read on to learn curious facts about all of them! 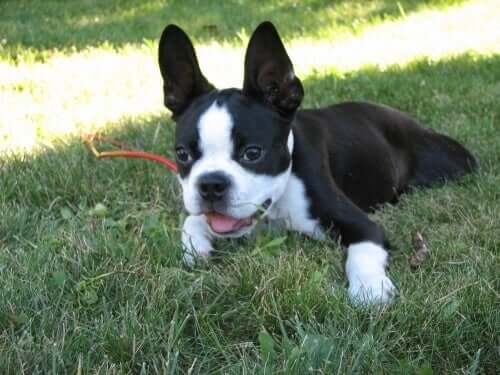 Brachycephalic airway syndrome is an obstruction of the upper airways. All short-nosed dogs suffer from this problem and these dog breeds live less time than others due to their clinical condition.

Originally from the United Kingdom during the seventeenth century, it’s a robust, strong, and muscular animal. The current English Bulldog is “stockier” than the Old English Bulldog. This breed is used to create the Boxer, Bull Terrier, and Bullmastiff. It belongs to the group of molossers – a group of dogs that have thick shoulders, large heads, short bodies, drooping lips, and facial folds. They have short white, beige, tabby, or red coats.

This is another popular brachycephalic dog breed that originated in Germany in the late nineteenth century. It’s a medium-sized molosser. Due to the type and size of its skull, it can’t always bark and also makes breathing noises. The Boxer is the result of the crossing of two extinct breeds: Bullenbeisser and Old English Bulldog. This dog breed is considered potentially dangerous in some countries, such as Spain.

It’s a very loyal, active, and watchful animal that needs physical activity to channel its energy. Although Boxers are quite docile with their families, they can be territorial and dominant with other dogs. If you have a Boxer, you have to make sure it socializes with other dogs right from when it’s a puppy.

While this breed originated in England, it was also bred in France at the end of the nineteenth century (during the Industrial Revolution). After that, the breed was taken to the United States. Nowadays, it’s a fairly popular dog in the West.

The French Bulldog is a small, muscular, small-tailed and bat-eared molosser. It has a snub nose, a broad, square head, and a wrinkled forehead. This breed is very quiet, doesn’t bark much, adapts to floors, can’t stand the heat, and snores a lot when it sleeps due to its condition.

This breed originated in China but became popular in France. This small Molossian is one of the most popular dogs in the world and, at the same time, belongs in the group of brachycephalic dog breeds. It has a compact body, skin folds, large dark eyes, and a curled tail. It can have a brown or black coat and always has a dark-colored snout. It’s not aggressive at all, loves to play, but can be somewhat wary with strangers.

This dog is friendly and obedient, ideal for company, and very low maintenance due to its short coat. It originated in the United States. The Boston Terrier is small in size, has a short muzzle, large, pointed ears, big, prominent eyes, and a short tail and paws.

This Chinese breed is highly valued in Eastern culture because it’s an excellent guard dog despite its small size. It originated from the cross between the Pekingese and Lhasa Apso. One of its main characteristics is that it has a long, thin coat, especially on the face (including the beard and mustache). Docile, outgoing, affectionate, alert, and suspicious of strangers, the Shih Tzu is another brachycephalic dog breed.

This ancient breed originated in the Chinese capital of Beijing. For centuries, it was only an Imperial Court and royalty family pet and its export was forbidden. Queen Victoria of England brought the first specimens to Europe in 1860. The Pekingese or Pekinese doesn’t bark excessively, even though it’s a good guard dog. It loves the comfort of home, doesn’t like to exercise (nor does it need too much of it), and can’t stand being alone.

The last of the brachycephalic dog breeds we decided to share here originated in Tibet. It’s characterized by the long fur around its head, as if it were a miniature lion. In its country, it’s a symbol of good luck and preferred by monks. Small in size, the Lhasa Apso requires continuous brushing and its coat may be black, white, red, sand, honey, or gold.

How Many Types of Molosser Are There?
Molossers are a family of large, strong dogs, with round heads, short fur, and long flews. Today, we'll tell you about the different types of molosser. Read more »
Link copied!
Interesting Articles
Dogs
Gordon Setter: The Most Beautiful Pointing Dog