Learn All About the Asian Smoke Cat

This breed attracts a lot of attention due to the patterns of its coat and its round and slanted greenish or yellowish eyes. The Asian Smoke emerged from a cross between an Asian cat and British cats. Read on to learn more about it! 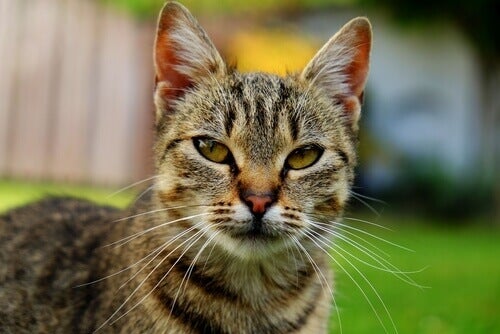 For cat lovers, any feline is precious and a fantastic choice to have as a pet! However, people seem to prefer some particular breeds, especially the Asian Smoke. This may be due to how similar this feline is to the tiger. Would you like to get to know more about this animal?

Learn more about the Asian Smoke

At first, it was known as a Burmoire cat because its origin seems to come from the Burmese cat. It was developed in Great Britain, through crosses of this breed with others that would provide it with its unique characteristics. The purpose was to ensure it could hunt mice.

At a time when old, low-roofed houses abounded, the presence of these small rodents was troubling. For this reason, during the late 19th century, people began to look for ways to create new breeds of cats that were faster, quieter, and with improved hunting instincts and other qualities that served to eliminate these bothersome pests.

However, due to the large numbers of breeds that emerged at that time, people considered this cat a lot more than just another rodent hunter. Perhaps due to its beauty or its friendly nature, the truth is that the villagers of the time began to contemplate the possibility of having it as a pet.

Precisely at this moment, the Asian Smoke began to gain popularity. This is because its beauty, very similar to that of a tiger, and its beautiful personality, along with how tranquil it is, made many people want to have one at home.

This is a very muscular medium-sized cat, especially in the paws and chest area. Thus, it has an imposing air of superiority over other breeds. This, added to its elegance when it moves, makes it one of the most sought after cats in the world.

It has a rounded head, pointed ears, and round but slanted eyes. Although its eyes can vary in color, they’re always greenish or yellowish.

In addition, its coat is short, soft, and can be of multiple colors and patterns. Accepted colors include blue, chocolate, lilac, reddish, caramel, cream, and black.

Nevertheless, feline clubs accept some special specimens if they have a very different color. We’re talking about those that resemble the Burmese cat and have white or silver tones.

Likewise, its tail is neither thick nor extremely hairy. In addition, it’s wide at its base and narrow at the end. When it comes to its limbs, we should note that the rear ones are slightly longer than the front ones, an advantage when it comes to running and jumping.

The Asian Smoke has a calm and friendly character. Thus, it can easily adapt to domestic environments. It doesn’t matter if they’re made up of a single member or large families. It adapts to all kinds of people and can also coexist with other animals without any problems.

This cat is tolerant and docile, ideal for children because they always want to play and are never aggressive. A curious fact is that it’s somewhat more intelligent than other cats, which will make it unconsciously prefer the most intelligent family member.

As a general rule, the Asian Smoke stays in good general health. However, some problems related to this breed are hair loss and cataracts. We recommend regular visits to the vet to make sure everything goes well and to avoid any of these problems.

Like all cats, it could also suffer from hairballs in the stomach. You should check this problem out with your vet to avoid more serious problems later on.

Did you like learning more about this amazing cat? Are you considering having one as a pet? Don’t think twice about it! You’ll have a very playful friend to share your home with.

All About the Peterbald Cat Breed
The Peterbald cat is a very sociable breed that behaves well along with other pets and children. What's more, it doesn't require regular grooming. Read more »
Link copied!
Interesting Articles
Cats
What's the Origin of the Persian Cat?