Why Won't My Cat Use the Litter Box?

Have you noticed your cat is not using the litter box? There could be many reasons for this. Find out more in this article. 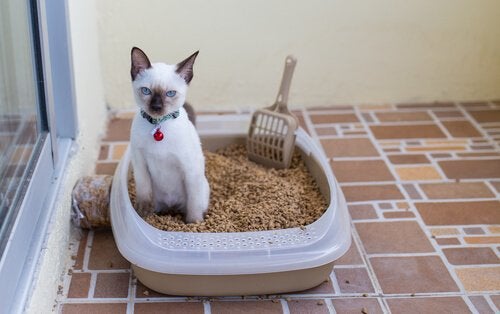 You’ve explained to your cat a thousand times that the litter box is the place to do her business. However, it seems your cat is just not understanding you, listening to you or even doesn’t care at all. In this article, we’ll tell you what the main reasons are for your pet to be this “unclean”.

Reasons why your cat won’t use the litter box

Maybe your pet has been clean for years and then, all of a sudden, its habits changed. Maybe it’s a new pet you just adopted who has to get used to the rules. According to veterinarians, a feline doesn’t stop using the litter box without a valid reason.

This is because it’s an instinctive behavior they acquire from the first month after being born. So, if your pet has started to “do its business” just about anywhere, here are some of the possible reasons:

If you notice a change in your cat’s habits and she’s no longer using the litter box, then you’ll need to take her to the vet. Chances are your cat could have a urinary tract infection or disease. This problem is very common in felines.

When the cat sees the litter box, it relates it to the pain from the urination, and so it will avoid using it. Your cat may also be urinating elsewhere because it doesn’t make it on time to the right place.

The cat’s litter box should be located in a private place, or at least somewhere there’s little noise or movement. It isn’t necessary to have a room dedicated to this purpose only. However, it should be somewhere peaceful far away from the hustle and bustle of daily life in the house.

On the other hand, if the sandbox is located in an inaccessible place or where the door is often closed, then the animal will have difficulty getting used to it. You can’t expect your pet to walk up or down two flights of stairs to a dark attic or basement to meet its needs.

Some cats are pickier than others in this sense. A feline’s sense of smell is 20 times more developed than ours. This means that when we notice the smell of urine or feces… they’ve already smelt it a long time ago!

Many cats will refuse to use the litter box unless it’s properly cleaned and there’s no old litter left. This is especially the case if the litter box is shared with another cat!

Owners should take a little more care in cleaning the box and avoid letting more than a couple of days go by without changing the sand.

4. The sand or stones

One of the reasons cats won’t use the litter box is when they don’t like what’s inside. However, we don’t mean the feces, but rather the sand or stones that you’re using. If you’ve bought a different brand, then maybe your pet doesn’t like it as much. Maybe the sand has a different smell that the cat’s not used to. Another possibility is that it hurts its paws.

Some litter boxes are not always suitable for the cat. We may think it’s the same to have a bigger or a smaller one, but that’s not the case. When your cat’s just a kitten, it will need a shallower place than when it becomes an adult. Every cat needs a good and proper space to do their business comfortably.

If you have a lot of cats, you’ll have to get several litter boxes. In some cases, you’ll need one box per cat. This is because they tend to be territorial and may get aggressive when another cat is around their “property”. There are some cats that won’t do their business in a litter box that was previously used by another cat, not even after cleaning it!

Similarly to humans, animals can get very attached to habits and customs. That’s why your cat knows that its sandbox is in that special corner and she always goes there when she has to do her “business”.

However, if for some reason you’ve thought of changing the spot… then don’t expect your feline friend to play along! It’s very likely your cat will urinate where the container used to be.

Cat Scratchers: Why Isn’t My Cat into Them?
If your cat doesn't care to use scratchers, then they might be more attracted to your furniture and/or other valuables items in your home. Read more »
Link copied!
Interesting Articles
Cats
Learn All About the Asian Smoke Cat