Don't be fooled by the small stature of the Cardigan Welsh Corgi. These dogs are hardworking and have a strong character. Discover more today! 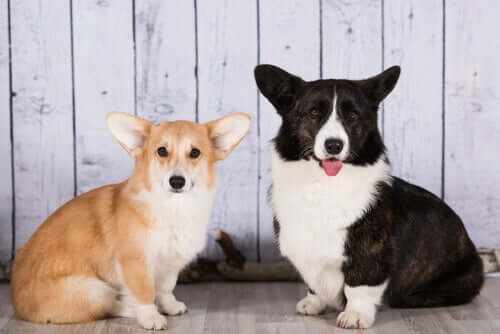 Thanks to the internet, the Corgi has become popular outside of England, which is where this breed originates. This dog breed, with a friendly appearance but a strong character, has all that it takes to become the king of viral internet videos. There are two types of Welsh Corgis, but today we’re going to focus on just one. Continue reading to discover more about the Cardigan Welsh Corgi.

The history of the Cardigan Welsh Corgi

First of all, it’s worth mentioning that Corgis are one of the oldest canine breeds in English. To be more specific, experts believe that the first specimens appeared approximately 3000 years ago.

The life and work of these animals has always had links to farming. While they first fulfilled the role of watchdogs, they are also skilled in herding. As a result, they became the smallest breed of herding dogs. They carried out their job of herding cows by nipping at the hind legs of these animals.

With the passing of time, other herding sheep appeared and farmers no longer needed the services of the Corgi. In fact, they were on the border of extinction until 1934. At that time, different breed clubs began to promote them, clarifying the differences between the Pembroke Welsh Corgi and the Cardigan Welsh Corgi. Today, the Pembroke is more popular, but the Cardigan is no longer at risk of extinction.

The Cardigan Welsh Corgi is small in size when we compare it to other herding dogs. Adult specimens measure approximately 12 inches at the whithers and tend to weigh some 30 to 38 pounds. However, they have a tendency to gain weight, so it’s common to see heavier Corgis. They are also believed to be related to the Dachshund.

The head of the Cardigan Welsh Corgi is similar to that of a fox. Its snout is triangular and long, with a black nose. Its ears are large in proportion to the size of its body. They are triangular in shape but with a rounded tip, and stand erect over the dog’s head.

The big physical difference between the Cardigan Welsh Corgi and the Pembroke has to do with their tails. Cardigan Welsh Corgis have long tails with long hair that has a spongy appearance like that of a fox. Pembrokes, however, have very short tails, or no tail at all.

The fur of Cardigan Welsh Corgis is very short and they have a very dense undercoat. Its breed comes in a multitude of color varieties: jasper blue, brown, tabby, red, tricolor with black points, or tricolor with white points. The snout, chest, and the line that descends to the animal’s abdomen are white.

Cardigan Welsh Corgis are dogs that, up to this day, are used to herd cows and oxen, even though they’re only a foot tall. They need to be brave and have a good bark in order to carry out their responsibilities.

These dogs are very loyal to their families and, as animals that used to work as guard dogs, they’re wary of strangers. In the same way, they don’t enjoy friendships with other dogs and may seem independent and not playful around their peers. However, they’re social with other animals.

Cardigan Welsh Corgis are active and intelligent. They need not only physical challenges but also–and even more so–mental challenges. Corgis can become stressed and bored and tend to herd humans, just as they learned to do with cows… by biting their ankles. There are other herding dogs, like the Border Collie, that also herd when they’re stressed out.

These canines are so intelligent that you can train them to resolve mental challenges, which they enjoy very much. Of course, it’s always important to challenge them positively and without imposing punishments, fear, or pain. Because they’re so brave, they won’t respond to anyone that dares to use force on them.

When it comes to the care of Cardigan Welsh Corgis, these animals are lucky to normally be very healthy. However, you do need to be sure to take your dog to the veterinarian on a regular basis.

Since these dogs are long, they need periodic examinations to see the condition of their backs. Pain, pulled muscles, and fatigue are among the most common problems. They are also somewhat prone to hip dysplasia and eye illnesses.

What’s more, they have a tendency to become obese, so it’s important to watch what they eat and how much. They also need plenty of exercise in order to burn off energy and stay in shape.

The Cardigan Welsh Corgi has survived for over 3000 years thanks to its bravery, ability to work, and loyalty to its human family. Knowing its history, we can better understand why it’s become the star of so many viral videos and even a recent children’s movie, The Queen’s Corgi.

Physical Activity Ideas to Get Your Dog in Shape
With the arrival of good weather, there are many types of physical activity you can do with your dog. Here are some ideas. Read more »
Link copied!
Interesting Articles
Dogs
Gordon Setter: The Most Beautiful Pointing Dog