The origins of this dog are related to hunting. However, it began to become popular in beauty contests, in which both its attractive fur and its height stood out. 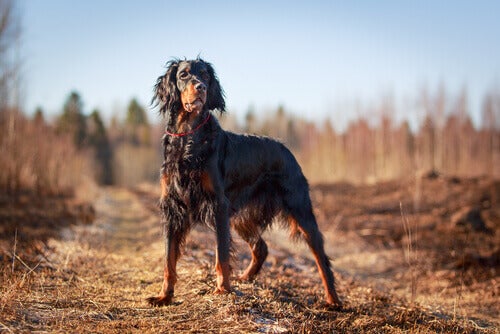 At first glance, the Gordon Setter is strikingly beautiful. Its shiny coat with vivid colors overshadow an equally brilliant and exceptional personality.

History of the Gordon Setter

The history of the Gordon Setter is closely related to the history of other similar dogs. Originally, it was used in hunting as a pointing dog. This means that its main job was to show hunters where the prey was, and fetch it once it was shot.

For this reason, the Gordon Setter was raised in the mountains and sharpened its senses, such as smell and hearing. However, when dog shows started gaining momentum, the setter’s good looks and nice coat became irresistible.

Thus, the Gordon Setter went on to become a popular dog and a pet. Its vitality and working ability, however, weren’t forgotten.

The Gordon Setter is a medium-sized dog with a square frame: robust due to its long but slender coat, long limbs, and majestic neck. In terms of weight, healthy specimens weigh between 25 and 30 kg (55 to 66 lb), while measuring about 60 cm (24 in) long without the tail.

These proportions give it the appearance of an agile, light, and tall dog. The limbs are elongated and it has a narrow back which helps create a harmonious and elegant movement when walking or running.

It has a slightly elongated head and a square muzzle. The ears are low and floppy on the sides of the head, but are neither elongated nor too large. The nose is always black.

The tail is long and straight, and it remains raised below the back line while at rest. It’s thick at the base and tapers toward the tip.

It only appears in the combination of a black and fiery color: it’s black all over the body, but has golden spots on the legs, chest, nose and eyebrows. Breeders covet the specimens with small white spots.

All pointing dogs are intelligent animals, and the Gordon Setter is no exception. This animal is restless and active physically and mentally. It needs both quality walks for physical exercise and interactive toys that stimulate its intelligence and make it think.

The Gordon Setter has a sweet, friendly nature and is eager to please the people in its family. It’s generally good with all humans, including children and other dogs.

It’s not a barking animal, and in a balanced environment where its needs are met, it’s generally well-behaved. However, it’s not a dog that tolerates being forced to obey, so a positive focused education that seeks its collaboration and not its submission, will be a success.

In general, they’re not guard dogs or protective of their family, however this depends on each individual dog and the training it receives. They’re not territorial chasing away strangers. However, thanks to their height, their presence alone could be enough to keep intruders away.

Caring for a Gordon Setter

Most of the care needed by the Gordon Setter is related to its coat as it’s fine and delicate. It needs frequent combing to undo the knots that can form, in addition to removing fallen hairs. It’s advisable to apply special shampoos for fine hair to help moisturize and keep it healthy.

In terms of health, it’s generally a healthy dog breed. However, its size and height make it prone to suffer from hip dysplasia and gastric torsion, and so it’s necessary to undertake regular visits to the vet in order to always keep its health in check.

A Few Tips for Grooming a Dog’s Coat
Trips to the dog groomer aren't always pleasant for a pet and that's a well-known fact. However, grooming a dog's coat is necessary. Read more »
Link copied!
Interesting Articles
Dogs
All About the Segugio Italiano