Mental Stimulation in Dogs: A Matter of Games

Mental stimulation in dogs causes positive physiological and behavioral reactions, which define their quality of life in some way. 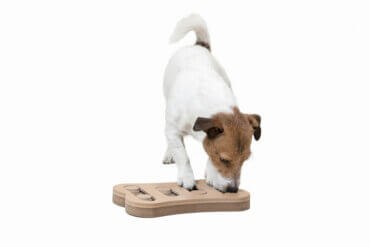 Mental stimulation in dogs through games generates a range of positive emotions. Scientific reports state that when games are played regularly and are linked to reward practices, it triggers a response from the central nervous system. In turn, these stimuli provoke beneficial physiological and behavioral reactions in the animal.

In this article, we’ll discuss how games contribute to the mental stimulation in dogs, because we mustn’t forget that, after all, they’re animals with instincts that must be satisfied.

The importance of play

Everybody knows that animals feel pain and can suffer. We also understand that “animal welfare” isn’t just the absence of pain and fear, but rather the prevalence of environmental enrichment.

It’s important to mention that pleasure is generally evaluated in the context of momentary sensory stimulation, such as the delight of taste. However, “well-being or quality of life” refers to a more prolonged internal state associated with mental stimulation.

Playing is important because it offers pets the opportunity to exercise their bodies while exploring their environment and learning new skills.

What happens when a dog doesn’t play?

Due to their living conditions, domestic and captive animals are often passive recipients of stimulation. This means that they can’t choose or control their experiences and behavioral options. For this reason, some social living beings forced into confinement and solitude are susceptible to boredom.

Some signs of boredom have been seen in dogs that lack physical and mental stimulation. The signs of boredom are varied, but usually include increased sleepiness and episodes of restlessness, as well as avoidance and sensation-seeking behaviors, which, unfortunately, are perceived by their keepers as bad behavior.

Thus, the lack of sensory or cognitive stimulation occurs when the animal has no opportunities to exercise, explore and/or learn. There’s evidence that animals without appropriate mental stimulation have weakened neural pathways, and in fact, their brains become physically smaller.

Why is play important for mental stimulation in dogs?

Without a doubt, the state of animal welfare is difficult to measure. Yet, evidence from recent studies shows that animals benefit from situations that enrich their experiences. Such situations include:

How does mental stimulation in dogs work?

According to scientific studies, problem-solving exercises are inherently motivating. During mental stimulation in dogs, dopamine —a mediator associated with learning and memory consolidation— is released.

Researchers point out that dopamine —a neurotransmitter of the autonomic nervous system— acts on the physiological response to rewards. These responses are vital for the control of behavior motivated by past experiences.

This is how dopamine determines positive reinforcement in the presence of rewarding stimuli.

Is there a certain age when the dog doesn’t need to play?

During the first years of life, dogs naturally show a marked inclination to play and explore. However, as the aging process begins, their vitality usually decreases.

At the same time, the offer of mental and physical stimulation to pets can diminish at home. Frequently, keepers think that older dogs have a reduced predisposition for playing.

However, the need for mental stimulation in dogs persists throughout their lifetime. There’s scientific evidence that the decrease in these activities may lead to accelerated aging in dogs.

Consequently, a lack of stimulating activities may result in a reduction of the animal’s quality of life, and may lead to a weakening of the bond between the dog and its keeper. Evidence shows that constant stimulation, throughout life, positively affects the preservation of the cognitive function in older dogs.

Now that we’ve explained the importance of games in the dog’s life, we’ll show you some:

Nowadays, there are social movements that work to help animals have a “good” life and not just a “not so bad” existence. This trend has become well-known as it’s popularizing the need to provide enriching experiences for domestic pets.

In general, these practices seek to promote positive emotional states in the long run, and maintain good cognitive functions in the animals. This ideological branch is also of scientific interest, as thoroughly studying the physiological mechanisms that underlie the process of mental stimulation in dogs is also fascinating.

Scent Games for Dogs: Brain Stimulation Through Smell
Dogs used their sense of smell as a means of survival in the wild. This sense can end up atrophying in those pets that live a pleasant domestic life. Read more »
Link copied! Next
Interesting Articles
Mental Health
Social Networks Change How You Perceive Animals