Group 5 Dogs: Breed Classification According to the FCI

In this very interesting article, discover the group 5 dogs according to the FCI classification. Read on to learn more about them! 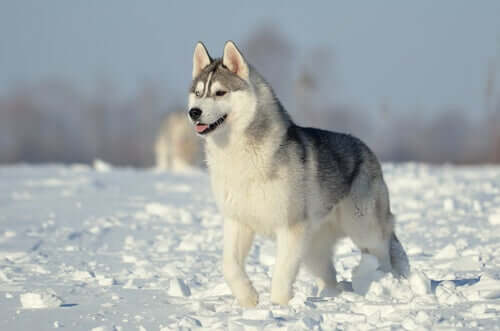 The Fédération Cynologique Internationale (FCI) – in English the World Canine Organization – is responsible for determining the standards of each dog breed and classifies them into groups according to their characteristics. In this article, we’re going to discuss the group 5 dogs, which include the Nordic Sledge Dogs, Nordic Hunting Dogs, Nordic Watchdogs and Herders, European Spitz, Asian Spitz, Primitive Dogs, and Primitive Hunting Dogs.

This section includes four breeds. The best-known are:

A working dog breed that originated in northern Russia. It looks a lot like a wolf. This dog is medium-sized and has a double coat of various colors to protect itself from the snow. It can also be a good pet if you train it as a puppy. Instead of barking, it howls. This dog loves living in a pack (it shouldn’t be alone) and can have blue eyes.

Another dog breed that looks like a wolf. In this case, the Alaskan Malamute has the capacity to lift up to 44 pounds (20 kg) for several miles without stopping. It also has a thick coat and a muscular body. The Alaskan Malamute always keeps its head up and is affectionate, loyal, self-sacrificing, and an ideal companion.

The ten breeds that make up this section aren’t usually well known outside of their home countries (Finland, Norway, Russia, and Sweden). We decided to highlight the following:

It was bred to hunt squirrels and rodents. This dog gets along very well with children and is the traditional dog of its country. This dog is somewhat stubborn, independent, playful, loyal to one person, and very curious. Thus, the Finnish Spitz needs daily walks, exercise, and weekly brushing due to its double coat.

This is a breed of hunting dog of Russian origin, more precisely from the area of the Ural Mountains. Laika means “to bark” in the local language. This is a very versatile dog that adapts to any climate (although it prefers the cold due to its thick coat).

This section also includes breeds that are mostly unknown outside their home countries (Finland, Iceland, Norway, and Sweden). They are the following:

Only two breeds make up this section:

Of the 11 breeds included in this section, we found several that are known outside Asia, including:

This lion-dog is one of the oldest in the world. It’s been used for centuries to guard Buddhist temples in China and one of its main characteristics is that it has a bluish-purplish tongue. This dog is robust, has triangular ears, a black nose, and moves peculiarly with its hind legs. This is an excellent pet that’s loyal to its family and can live in an apartment.

Although this Japanese dog was created for hunting, warriors also used it to defend themselves and to attack. It resulted from the cross of an English Mastiff and a Tosa. It’s large, has a thick coat, and small triangular eyes. Regarding its temperament, it’s a fairly quiet and reserved animal, as well as loving, protective, and loyal.

Five breeds make up this section. From them, we can highlight the:

Originally from West Africa, people have used this dog to hunt and track. It doesn’t bark, but instead emits a yodel-like sound. This dog is playful, somewhat restless, and needs obedience classes from an early age so that it doesn’t break objects at home. It doesn’t like water and cleans itself as cats do. In addition, it doesn’t smell like other dogs. The coat can be black, brindle, or brown.

This section is made up of six breeds. Although they’re not too well-known, we decided to talk about one of them:

From the Canary Islands, this brown dog has an elongated body. It doesn’t have a thick coat and likes to hunt from an early age. When it finds prey, it emits a short, repetitive bark. This dog is very loyal and noble, somewhat restless, hardworking, intelligent, and sometimes stubborn. 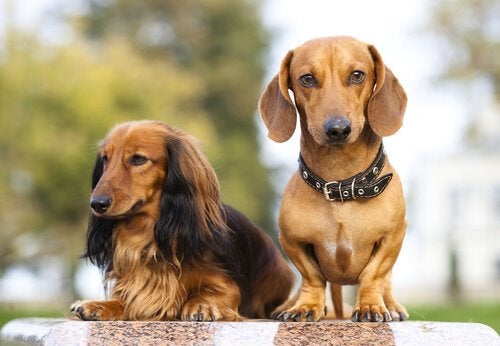 Dogs in FCI Group 4: The Dachshunds
In this article, we'll tell you a bit about which dogs belong in group 4: the Dachshunds.  Read more »
Interesting Articles