The Puli: A Dreadlocked Dog from the Carpathians

Although they were originally sheepdogs they also make excellent guard dogs. They're so intelligent, patient, and tolerant that they're also great with kids. 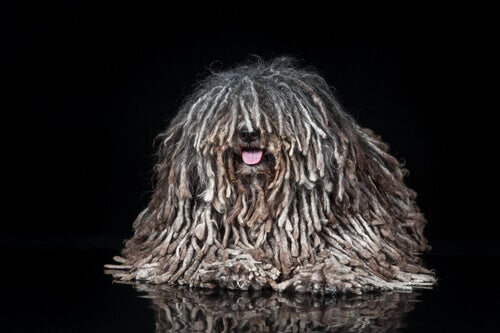 We don’t know about you, but when we see a dog with dreadlocks, we can’t help but smile. They’re so much fun and watching them run is quite a spectacle. Here’s one of the most famous ones – the Puli!

The Puli, a peculiar breed

Like other dreadlocked dogs, this breed was used as a sheepdog. They’re very well suited to this task and their appearance was a big part of the tactics used by shepherds.

Wolf attacks on herds were becoming more common and wolves will always try to avoid the sheepdog. But how can they do that if the sheepdog looks like a sheep? This is the reason that Puli dogs were used for so many years and were highly valued by farmers.

Apparently the first Puli on record was found in Iraq, buried next to their owner. This breed surprised people a lot at that time because their hair was so unusual. About 1,100 years ago, they began to arrive in Hungary, which is the official origin of the breed we have today.

As the centuries rolled by, the Puli almost became extinct. They were extremely highly valued and could easily cost up to a year’s salary. In fact, they were so highly valued by livestock owners that any dogs that were not intelligent enough or good workers were slaughtered.

Thanks to Hungarian breeders, the Puli was preserved and we can still enjoy them today!

Their main feature is doubtlessly their hair. They have a full coat of dreadlocks that sometimes drag along the ground. This makes them look much bigger than they actually are.

Acceptable colors for a Puli are black, brown, or any type of gray. Sometimes, they’re allowed to have black faces or white spots on some parts of the body, such as between the toes.

Being such a hairy animal, they’re difficult to measure but they’re normally between 14 and 20 inches tall and weigh between 22 and 33 pounds, depending on gender.

Their tails are also covered in hair which makes them difficult to see, although it curves forward which gives it a more elegant look and posture.

Pulis are strong animals and well-suited to exercise or competition in canine sports like agility or canicross.

The Puli’s temperament and character

Puli dogs have a reputation for being very intelligent, docile, self-sacrificing, patient, and tolerant. They’re perfect for families with children and make an ideal playmate.

Due to their sheepdog past, they are quite vigilant, so they can make good guard dogs too. They’re very affectionate towards their owners and will even give their lives to protect them if necessary.

However, they also require socialization from a young age so that they know not to treat your friends as strangers when they come to visit!

The Puli is generally a healthy breed, but they are prone to certain problems such as hip dysplasia and sight problems, such as cataracts.

They’re also very active so they need daily exercise, although it doesn’t need to be too intense.

Their dreadlocks grow naturally, so they shouldn’t really be brushed. However, you’ll need to examine them from time to time to look out for ticks or fleas. Other than that, there’s nothing particular you need to worry about. Just enjoy their company! Would you like to have one at home?

Komondor
Today we'll be talking about a very special breed: the Komondor. Keep reading if you're interested in learning more about this beautiful creature. Read more »
Link copied!
Interesting Articles
Dogs
Take a Look at These Breeds of Dog with Big Eyes!