The St. Bernard: A Natural Protector 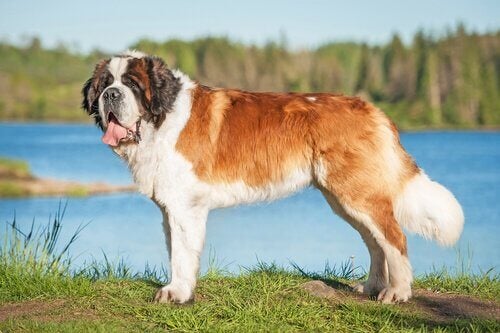 That big white dog with orange patches and a barrel tied around their neck is the St. Bernard. Do you remember the movie Beethoven? The film’s protagonist is a dog from this breed. If you don’t know much about this breed,  here you can learn all about it.

St. Bernards were already well known before 90s movies came along. This breed was especially famous for doing rescue work in mountainous areas. This beautiful dog is a descendant of the Alpine Mastiff, which was crossed with other large dogs like the Great Dane or the Newfoundland. Below you can learn about the St. Bernard’s origins in greater detail.

This dog comes from the original mastiff that the Romans brought to the Alps. The monks adopted them to help people that got lost in the mountains in snowstorms. Due to the stories about travelers saved by these dogs, they eventually became famous worldwide.

These dogs have saved hundreds of lives in the Alps and in other mountains. Travelers from these high mountain areas soon discovered that they would be safer with guide dogs. They are able to get people out of dangerous situations with their strength and determination.

The first documents about the St. Bernard breed date back to the late nineteenth century. In the city of Basel, the breed became so popular that the Swiss St. Bernard Club was founded. Shortly afterward, this dog became a national symbol and was recognized to be native to Switzerland. This was the step that established a standard for the breed.

They are tall, sturdy brown dogs with very strong bones, but with a sweet, compassionate personality.

The St. Bernard is known for having a lot of fur, as well for that characteristic small barrel that has always hung around their neck, in which contain liquor according to common belief liquor. St. Bernards have very noticeable traits. Their fur is easily distinguishable, and they have a heart as big as their size.

Oftentimes, you’ll hear myths about large dogs, but St. Bernards are as kind as they look. You just have to take a look at those sincere eyes looking back at you. Their main motivation is helping people who have problems.

The St. Bernard is a tall, sturdy brown dog with very strong bones, but with a sweet, compassionate personality. They have a thick neck, a wide back, and a long tail. Dogs of this breed have a noble appearance, and a solid, strong build. Despite their size, they’re completely friendly.

Their legs are straight and chunky, and their feet are very large. As for their fur, there are two types of St. Bernards: those with straight fur and those with long fur. If you choose one of these dogs, remember that you’ll have to learn some tricks to pick up all of the shedded hairs around the house.

The main colors combined with white are: reddish brown, orange, and tabby. They mainly have those patches on their backs, around their eyes, and their hind legs. They have short hair near their faces and long fur on the rest of their bodies. Their thick tails have white tips.

Due to their strength, these dogs don’t need much special care. However, there are some details that you’ll need to take into consideration. They´ll need a good amount of exercise on a daily basis. They need to move those powerful muscles to start the day off right. If you want to have a St. Bernard at home, you should be able to exercise them on regular basis.

Also, because he’s so big, he’ll need space to move around in so he can be at ease. He also drools a lot, so you’ll always need to have a mop on hand (no joke!). A large dog needs care according to his size. It’s not exactly like picking up what a poodle might leave behind.

You should brush him daily and maintain good hygiene. You’ll have to pay close attention to his eyes and mouth. In addition, don’t forget that a dog of this size needs a lot of good food. The cost of caring for him with also be high. A St. Bernard is a great choice, especially if you have children at home.

A St. Bernard’s personality is exactly what they appear to be. They are one of the noblest dogs you’ll ever find. They’re friendly, affectionate, love children and are naturally protective. A St. Bernard is one of the best choices for children.

These dogs are willing to save children from any situation, even if that means risking their own life. That’s why they were chosen to protect travelers in one of the most dangerous areas of the mountain. They were brought to Mount St. Bernard, which gives them their name.

These dogs will become the playmates, friends, babysitters, and protectors of children. They´ll give them “hugs” whenever they need them. Although their large size might be intimidating, don’t worry because the St. Bernard is just a big puppy!

They’re ideal dogs to have in any type of house. It’s true that space can be scarce in a small house, so look for open places where they can exercise. They have a quiet nature and they’re not destructive like other dogs. Also, these dogs will defend their loved ones.

If you choose a St. Bernard, you’ll receive a lot of affection, loyalty, and friendship from this great companion. Maybe they’ll be like Beethoven, and you’ll have a lot of good times. In addition, they’ll make you and the smallest members of your family feel protected at all times.