Many Japanese Chin owners would agree that their dogs train them, rather than the other way around! 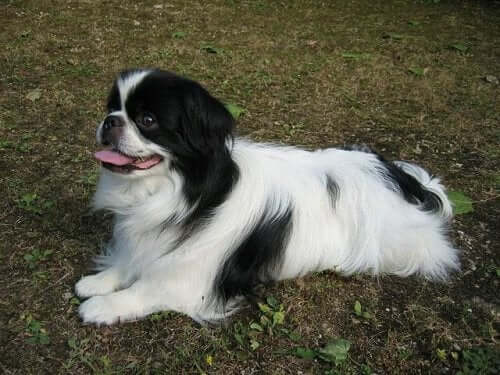 This petite and aristocratic breed would definitely delight miniature dog lovers. Their intelligence and size make the Japanese Chin an ideal companion dog, although their selling price is not within the reach of just any wallet.

This species’ story begins in Asia, of course. In the year 732, Korean sovereigns presented the Japanese court with the ancestors of the Chin we know today. In addition, there are records that indicate that other specimens also reached China.

During the rule of Tsunayoshi Tokugawa (1689-1709), the Japanese Chin was raised as a ‘toy dog’ at Edo Castle in Japan. A British captain brought the breed to England in 1613, and in 1853, the breed reached the United States of America. In fact, two of the dogs that arrived on American shores were gifts for Queen Victoria of England.

Since 1868, the Japanese Chin has been a customary companion dog in high society. Today, it’s another companion dog option that has adapted particularly well to families.

We’re looking at a small-sized dog with a lot of hair. They have a wide facial region which, together with their coat, gives them a distinguished appearance. The International Cynological Federation places this breed in “Group 9” of Companion and Toy Dogs.

The Chin’s back is wide and slightly arched. In terms of proportions, it’s usually around 8 to 10 inches tall and its weight varies between 3 and 15 pounds. As is usual, females tend to be smaller and lighter than males.

Its coat is soft, long, and silky. With the exception of their face, this dog’s straight hair covers its entire body. The neck, ears, thighs, and tail possess hair that appears in the form of abundant fringes.

As for the coat’s color, breed standards dictate that it should be white with black spots. These spots are most commonly scattered symmetrically around the eyes and ears, as well as the rest of the body. Moreover, the nose should be wide and short and should match the coat’s color.

The ideal home for a Japanese Chin

Centuries of training as a companion animal have allowed this intelligent animal to acquire a sweet and pleasing character. It is ideal as a family dog as it enjoys the company of children. However, we must bear in mind that this breed doesn’t bear loneliness very well.

One of the advantages of having a small dog is that they don’t need to exercise a lot. Generally, one hour of exercise spread out in separate walks during the day will be enough to wear out this pet. Its affable character doesn’t tolerate discipline very well, so this breed is limited to be used as a pet only.

The Japanese Chin fits well with families that don’t have a very large house but can spend time with them. Nevertheless, small children can be a problem. Due to their small size, they can be accidentally injured by playful toddlers.

Given its abundant and silky hair, this breed requires a thorough brushing two or three times a week. It’s recommended to use a hard bristle brush and to groom the ear area especially. This is where hair knots are most common. In addition, a regular bath will also help to maintain their coat.

Due to their head’s shape, we must take into account that the Chins’ most exposed area is the eyes. Regular cleaning of the eyes and ears can help keep infections at bay. Moreover, in case of any abnormality, you should always consult your vet.

Last but not least, the most common diseases suffered by Chins are dry eye syndrome and hip dislocation. However, their short muzzle can also suffer from respiratory problems.

Found this article helpful and interesting? Thank you for joining us today! Until next time.

Japanese Dog Breeds – The Most Common
Today we'd like to focus on the most common Japanese dog breeds. Note how many of their names have "Inu," as a second word, it merely means "dog."  Read more »
Link copied!
Interesting Articles
Dogs
The Causes of Epilepsy in Beagles