Before you adopt a Norwegian forest cat, you should learn a bit about what it needs to lead a happy, healthy life. 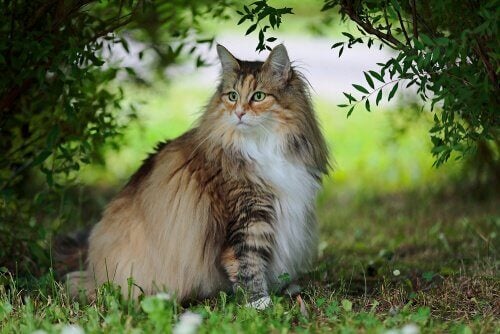 Even though it’s a gorgeous breed, the Norwegian forest cat is still surprisingly unknown outside of Scandinavia. With a wild appearance and a mild-mannered temperament, this breed also has a fascinating history that makes it even more interesting.

The origins and history of the Norwegian forest cat

The Norwegian forest cat makes a lot of appearances in traditional Scandinavian mythology and legends. One of the most well-known of these legends is that these cats were the only creature capable of pulling the goddess Freya’s carriage. Not even the god Thor could do it.

Moving on from the myths, there’s some evidence that suggests that the Norwegian forest cat is one of the oldest breeds of cat in the world. One of the first written accounts of them came in 1599 from Peter Friis, a Danish monk. He was trying to write a detailed description of the three types of lynx in the forests of Norway.

Because it’s such an old breed, we don’t know too much about its origins. But the most likely answer is that their ancestors were wild cats that the Vikings brought along on their sea journeys. Why? The theory is that they would have brought them to keep rat populations on their boat in check.

As old as it may be, the breed only got its first official recognition in the 1930s. It wasn’t until the 1970s that there was an official standard published by the Fédération Internationale Féline.

But even with that official recognition, the Norwegian forest cat still isn’t very well known outside of Europe. On top of that, some theories even say this breed might have a link to the breeding of the Maine Coon, one of the most popular types of cat in the whole world!

Characteristics of the Norwegian forest cat

It’s a sturdy, large breed of cat. They can weigh nearly twenty pounds as adults. Their bodies have thick muscles, big bones, and strong claws. That means they have a lot of flexibility and precision in their movements, and are great climbers.

Some of their more interesting physical characteristics are their triangular head, their high hindquarters, their long tails, and their pointy ears, which make them look very similar to lynxes.

Norwegian forest cats have a long, thick, double coat of fur. Their inner coat is fleecy, dense, and very close to their bodies, which shields them from the cold and other bad weather. Their outer coat is soft, long, silky, and can either be a solid color or have patterns of multiple colors.

The recognized colors according to the official standard include: blue, black, red, silver, gold, cream, cream blue, and brown. The standard also recognizes cats with tiger-like, two-color, and tri-color fur.

They may seem wild, but Norwegian forest cats are also very attentive, friendly, and intelligent. When they live with a family, they’re generally playful, patient, and affectionate. They also feel protective of their owners and their home. It’s also an active breed of cat that loves to run around, climb, and walk outside.

Because of its protective instincts, this breed can act territorial at times. Usually that means being skeptical or shy around strangers. So, it’s best to socialize a Norwegian forest cat as a kitten and teach it to interact with the people and stimuli around it.

This breed only sheds once a year, which makes it much easier to care for their fur and keep your house clean. Experts still recommend brushing yours at least twice a week to prevent dirt and dead fur from building up, and keeping it from knotting.

You also need to make sure it has good dental hygiene to prevent plaque and any other oral conditions like gingivitis. You should ideally brush your cat’s teeth two to three times a week to prevent food from building up between its teeth and gums.

Like we said before, socialization is a key part of raising a Norwegian forest cat. This will help you avoid any behavioral problems and accidents related to their territorial instincts.

This breed is generally healthy and tough, and won’t get sick very often with the proper care. Unfortunately, there are also some hereditary conditions to look out for, along with things that are common to cats in general. For example:

Norwegian forest cats have an astounding life expectancy of around 14-18 years. That can stretch even further if you give it proper care and medical treatment throughout its life. 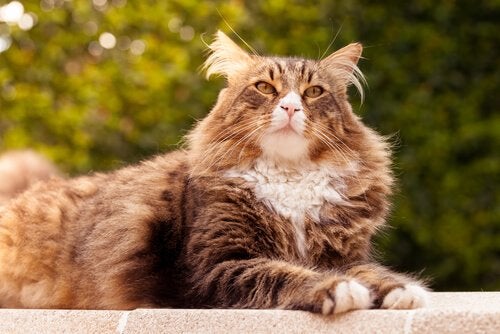 The 5 Largest Cat Breeds
Among the largest cats, it's interesting to know that them were born as a crossbreed between domesticated and feral cats Read more »
Interesting Articles