Recent research suggests that social networks change how you perceive animals. Today's article will tell you how. 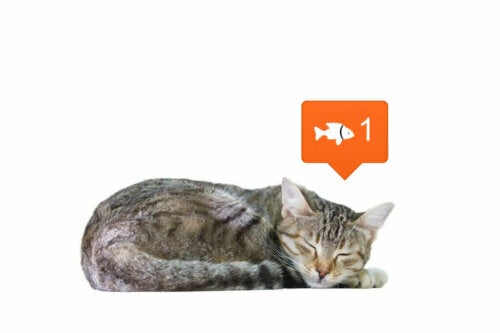 There’s no doubt that we live on a globalized planet and have the ability to be continuously connected. The Internet allows users to share, obtain knowledge, and even make a living. This is supposed to be the information age and yet few people are aware that social networks change the way we perceive animals.

Despite the many benefits of online media, we must take certain things into account when exhibiting our pets on our personal pages and when looking for reliable information about the animal kingdom.

How social networks change how you perceive animals

Social networks are all the rage and this isn’t surprising. Even so, here are some facts to put them into perspective:

These are astronomical figures, as you can see. Several studies show how this activity translates into the world of animal care.

For example, 80% of searches related to animal care (animal store, dogs, dog food, for example) considerably increased in the last four years. “Pet store” is the most searched for reference out of all analyzed terms.

Similarly, the presence of animal pages on social networks is also on the rise. Estimates indicate that there are over 100,000 active links to pet portals.

The intention of the data is to try to show the importance of pets in the information age. Not only are they present in adorable photos and videos but their owners are continuously looking for information to improve their quality of life – or so they think.

Animals and social networks – a world of lights and shadows

Social networks can alter our perception of the animal world according to several scientific studies. Of course, it depends on the context and population stratum.

For example, the results were quite different when researchers presented two stories about primates to various participants: one in favor of keeping monkeys in captivity and the other against it. (Note that the image in the articles was the same in both.)

Thus, Internet users’ response to the same image depends largely on the context. This can soften or increase the level of awareness and critical thinking about the animal world in a way.

Awareness about how you perceive animals on social media

In addition to these results, there were other studies about the impact of the presence of animals in social networks and educational media on children.

Some people believed the existence of drawings, imitations, and interpretations of diverse living beings was negative for the awareness of infants about nature and ecosystems. The logic behind it is children would have a biased association with nature. However, this isn’t accurate.

For example, these studies revealed that the presence of anthropomorphic animal figures (interpreted from a human point of view) in educational material doesn’t affect the level of children’s understanding of living beings at all.

Those exposed to information about the natural world came out with more knowledge, regardless of the anthropomorphic figures, drawings, and material accompanying the exposed informational content. There’s a possibility for knowledge as long as there’s reliable information.

A matter of nuances

As you can see, the interaction between animals and social networks in human culture is complex, to say the least. For example, children don’t seem to mind the presence of informative material transformed from a completely human point of view.

Similarly, studies suggest that, depending on the source and information, one can attribute different characteristics to the same animal images. Finally, we can modulate the level of the debate depending on the portal.