Is it OK If My Dog Doesn't Bark?

If your dog barely barks or doesn't bark at all, this could be completely normal. Find out more in this article. 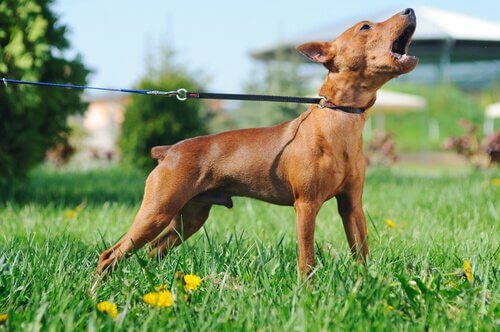 Barking is the most straightforward way for a dog to communicate with people. When dogs bark a lot, we’re normally pretty keen to get them to shut up. But what happens if the opposite happens? Is it normal for a dog not to bark?

Dogs communicate in many different ways

As well as barking, dogs use other ways to communicate. This is why a responsible owner should learn to read their dog’s body language. This way you’ll understand their moods and needs a lot better.

However, if your dog doesn’t bark, this might seem very strange. However, there are some dogs that bark very little. In general, they tend to be more expressive with their body language, their ears or their tails. As a result, they don’t need to express themselves audibly.

Anyway, to give you peace of mind, if you think your dog is too quiet, take him to the vet to rule out any physical or psychological problems.

Although barking is one of a dog’s unique characteristics, some dogs don’t bark much or even at all. In most cases, it’s perfectly normal. Below, we’ve detailed some of the reasons for this.

Do some breeds bark less than others?

There’s no strict rule about barking and breeds. Within the same litter, there may be a dog that barks a lot and another dog that barely barks at all.

However, Nordic dogs don’t tend to bark a lot, choosing instead to howl. And other breeds like the Shih Tzu do have a reputation for barking.

There is also the extreme case of Basenji, an animal that can’t bark because its vocal cords are very similar to those of more primitive dogs. They communicate using acute howls, which some people describe as a sort of yodeling.

Although it might not be a problem if your dog doesn’t bark (in fact, your neighbors will probably be grateful), it would be a good idea to go to the vet. Whilst most people have problems with excessive barking, if your dog is completely silent, then it’s better to rule out things like deafness or some sort of injury.

For example, if you’ve adopted an abandoned dog, perhaps the previous owner used to use anti-bark collars or abuse him. As a result, he doesn’t bark. In these cases, the situation can be reversed with plenty of love and affection and perhaps help from an animal behavior specialist.

There are also extreme cases where dogs have had their vocal cords removed. Some people have used this extreme measure to stop excessive barking.

Give your dog time to bark

Another possible reason is that perhaps your dog just doesn’t feel at home yet. If your dog has come from a shelter or was a stray, this can be completely normal. He just needs time to adapt to his new environment before he reveals his true personality.

The important thing is this: whether he barks a lot, a little, or not at all, you’re responsible for his care and you need to learn to understand the way that he communicates.

Why You Shouldn’t Punish Barking
We love it when our dog barks while we play with him or when he is defending our home. But if your dog barks when he shouldn't, it could be annoying for you and others around you. We'll share with you why you shouldn't punish your dog's barking Read more »
Link copied!
Interesting Articles
Bath Time
Why Do Cats Hate Water?