Characteristics of Displaced Abomasum in Cows

A displaced abomasum is a condition that can have serious consequences in cows. This is because it leads to a lack of appetite, which is particularly worrying when you're a farmer. An animal suffering from it can become scrawny and weak, and it could even stop producing milk. The good news is there's a low-risk treatment available. 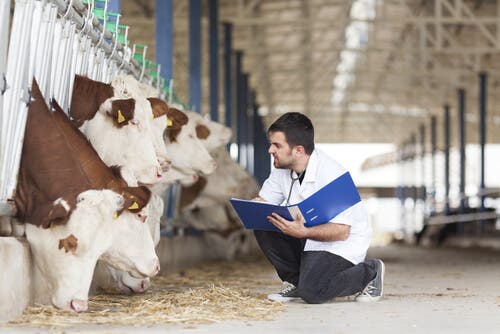 A displaced abomasum might be a consequence of abomasitis and is one of the most common illnesses in ruminants. In fact, it leads to both digestive and behavioral problems. (The abomasum is the fourth stomach chamber of ruminants, the other three are just for rumination. That is, for the further chewing of partially digested food.)

This disease occurs more frequently in dairy cows over the fourth year of age. Calves, males, and meat breeds have a lower predisposition to it.

In general, dairy cows such as the Holstein Friesian have higher demands and suffer from nutritional stress. This means that they’re more frequently affected by this pathology. This disease occurs mainly during the puerperium. That is, during the period after calving in which the body of the animal slowly returns to her productive state.

Diet is another factor related to this disease; thus, diets with a low amount of non-energetic fiber after giving birth, obesity, or other dietary mistakes can cause this pathology. It generally occurs due to a reduction in the volume of the rumen, allowing the abomasum to move and even twist.

Other factors such as the season or the stables can influence it. In fact, this disease is more frequent in cold seasons and in cows with little mobility. That is, those housed in intensive livestock farming.

At the beginning of the disease, the cow’s appetite decreases and they begin to lose weight. They’ll try to consume forage instead of concentrated feed. In addition, their milk production reduces by more than half. These symptoms shouldn’t be confused with natural behavior during and after puerperium. This is one of the most important periods in the reproduction of dairy cows.

The milk production will continue to go down if an animal doesn’t get treatment, and they’ll also become scrawny and weak. They may not even be able to stand on their feet. Due to their loss of appetite, there’ll be hardly any stools to eliminate and the few ones there are will be liquid. In addition, the animal may develop a fever.

Diagnosis and treatment of displaced abomasum

The diagnosis must be made by the veterinarian, who will visit the livestock farm after discovering the symptoms — which are rather nonspecific. It’s for this reason that it’s important to count on the skill of a good veterinarian. They’ll be able to diagnose the disease by doing a check-up on the animal.

As for treatments, there are several and they depend on the expertise of the specialist, the financial means of the rancher, and the individual case. One of the most popular treatments is to turn the cow around after administering a calcium solution.

However, the most common thing is to perform a surgical operation. This is because the strength of this type of animal allows vets to carry out surgery on the spot. They do so with the animal standing and under anesthesia. This allows them to perform an exploratory laparotomy, which is an incision to see the level of torsion in the abomasum together with other possible alterations.

From the laparotomy itself, the veterinarian may decide to straighten the torsion and readjust the abomasum back to its normal position. Then, they’ll fix it to the abdominal wall with a suture, which will prevent the typical relapses of this condition.

The disease, if we pay attention to livestock, has a low mortality rate. Also, surgical intervention isn’t risky and prevention is fairly simple by properly caring for the livestock.

Foot and Mouth Disease in Cattle
Foot and mouth disease was only officially discovered in the 19th century but has been recorded for hundreds of years. Find out more here. Read more »
Link copied!
Interesting Articles
Illnesses and Treatment
What Causes Brachycephaly in Dogs?