Which Are the Most Common Diseases in Beagles?

Beagles are known for their robustness, but that doesn’t exempt them from having certain problems inherent to their breed. 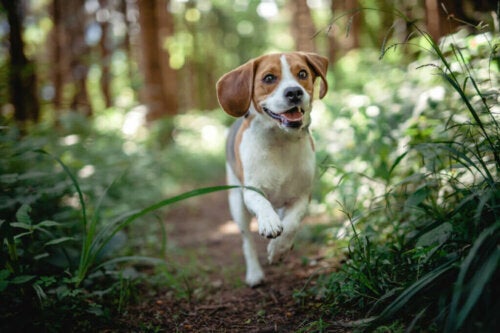 Beagles, those ancient hunters selected for their wonderful sense of smell and robustness, also have their weaknesses. In this article, you’ll find out about the most common diseases in beagles.

Many of these illnesses are common to all dogs, but slightly more prevalent in this breed. First of all, we’re going to give you a brief overview of the beagle’s traits, a dog as sociable and intelligent as it is beautiful. Don’t miss it.

Known for their use in hunting and animal testing, beagles have actually won people over for other reasons. One of them is their sociable character and great energy, in addition to their general lack of congenital disorders.

Another reason is that they’re very intelligent dogs, enjoy company a lot, and aren’t aggressive at all. Despite their obedience, it can be a little difficult to get them to focus on the keeper’s indications, especially if they’re on a track.

That leads us to the next point: along with the St. Hubert Hound (or Bloodhound), it’s one of the dogs with the best sense of smell in the canine kingdom. The morphology of its muzzle helps catch any odors near its nose, so these dogs are better at following traces on the ground rather than in the air.

Beagles have a life expectancy of about 15 years, according to their medium size. They tend to get along well with children, hence their popularity in homes as a family member. But careful, each animal has its own personality.

Which are the most common diseases in beagles?

This breed doesn’t have important congenital diseases, in fact most of them are due to the traits of its morphology. In any case, here are the most common ones that you’ll find.

An epileptic seizure is defined as a brain attack resulting from an excessive neuronal discharge that manifests itself as convulsions, hyperthermia, excessive salivation, rhythmic blinking, or facial contractions, among other signs. This condition is easily controlled with medication such as phenobarbital or bromide potassium.

2. Hypothyroidism: one of the most common diseases in beagles

Among the most common are hair loss, color changes, alopecia, predisposition to skin infections and, rarely, abnormalities of the nervous and reproductive systems. The cause of this disease is the deficient activity of the thyroid hormones, which in turn, causes a drop in metabolism.

The long, drooping ears of this breed are often an impediment to proper ear ventilation, so these dogs tend to get ear infections. If you see your dog’s head tilted, if it scratches, has a warm ear, or complains when you touch it, you may need to visit the vet to check that everything is okay.

It’s true that, despite their robustness, the beagles are one of the breeds that can present eye problems. Here are the most common:

Conclusions about the most common diseases in beagles

As you can appreciate, beagles also have some diseases linked to their breed. As always, the first recommendation is to prevent all this with a good lifestyle, but timely veterinary care is what will save your canine companion from an accident or superficial injury that could worsen with time.