Is It a Good Idea to Have a Fennec Fox as a Pet?

At the moment you're allowed to keep them, but trading and capturing this species is usually illegal, and this may have legal implications for buyers. Vets also don’t know much about this animal, so it’s a risky decision. 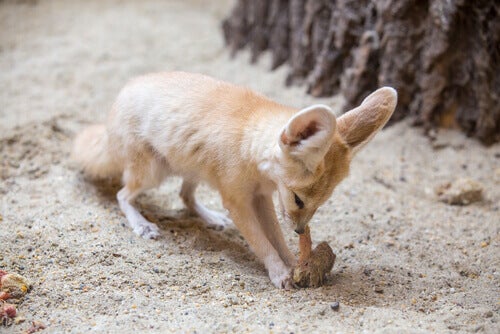 The fennec fox is a very striking animal, which makes you fall in love with it at first sight. Surely you’ve seen videos on social networks, which proves what an adorable animal it is. Nevertheless, we mustn’t forget that it’s a wild specimen. In this article we’ll examine whether it’s advisable to have a fennec fox as a pet.

Nowadays, this endeavor is legal, and we highlight this because it’s been proposed on more than one occasion to classify it as an invasive species, which would prohibit its purchasing or possession. Although it’s currently possible, the legislative change is more than likely. Therefore, it should make us think about whether it’s a good idea to have a fennec fox as a pet.

Even if some wild species such as iguanas or parrots may live in our house, the truth is that they’re wild animals, and it’s unnatural for them to live in captivity.

Even if owning one is legal, the truth is that their sale isn’t legalized. Therefore, we can end up buying an animal captured illegally in its country of origin, which is clearly immoral.

Regardless of sellers guaranteeing their origins, it’s very common for them to have been illegally captured in the wild. Unfortunately, it’s relatively cheap to capture and transport this species. Therefore, we may even be committing a crime by buying it, especially on the internet.

The desert nights of the fennec fox

One of the main reasons for not keeping a fennec fox as a pet is the climate. Its ears, fur and physiology make it fit for the desert climate, and the extreme temperatures and lack of water. That’s why, as a pet in areas such as Europe and the United States, it suffers from renal and thermoregulatory problems.

Its behavior is another reason why the fennec fox is an ill-suited pet. As a nocturnal animal, in theory, it shouldn’t be active during the same hours that we’re awake.

That’s why artificial light and the change in its circadian rhythms make the fennec fox prone to diseases of hormonal character, similar to the adrenal disease in the ferret. It’s important to stress that there’s little veterinary experience regarding this animal. Consequently, there may be very few solutions after disrupting the circadian rhythms of this species.

Is it a good idea to have a fennec fox as a pet?

In general, carnivores spend most of their time in the wild searching for prey. When we take away their opportunity to search and hunt their own food, they get bored most of the day, and usually have stereotypical behaviors. This would also affect the fennec fox should we choose to have it as a pet.

Environmental enrichment could mitigate these problems. However, the fennec fox must have, above all, a large shelter with sand and rocks, where it can have its burrow with outside access.

In addition, the facility must have a cemented base to prevent it from escaping by digging. That’s why it’s unfeasible for a fennec fox to be adequately cared for when kept as a pet in a regular house.

Note that, even if it doesn’t have the possibility of hunting, the use of dead prey in the form of day-old chicks or rats seems indispensable for its welfare. The welfare and health implications of giving it only feed are unknown.

In houses or apartments, the fennec fox often ends up getting frustrated. Consequently, it unloads this frustration on house furnishings, and can even become aggressive. Living with humans can be a bad experience for the fennec fox, just as it is for the meerkat.

As adorable as it may seem, and regardless of how much we commit to taking care of it, the truth is that it’s very difficult for a fennec fox to live happily as a pet. In short, only professionals or specialized centers should keep it. Definitely, this species is better off in the desert, where it belongs.

4 Fox Breeds that You Should Know About
Foxes are animals that often appear in fables, legends and stories. Both admired and feared by farmers, theses animals are praised for their intelligence. However, you may only know about one fox breed, so continue reading to learn about the fox breeds below: Read more »
Link copied!
Interesting Articles
Profesional Advice
What Is the Cat High-Rise Syndrome?

The cat high-rise syndrome is a major cause for visits to the vet. Despite being famous for their ability to…

Profesional Advice
What to Do if Your Dog Ingests Poison

Many people don't know when or why they should take their pet to the vet. Vet visits are vital for our…

Every farm requires an arsenal of preventive and basic care measures to ensure that its animals are free of disease.…