This deadly viral disease is spread to humans through dog bites. However wild animals, such as foxes or wolves, play a vital role in transmitting it to dogs 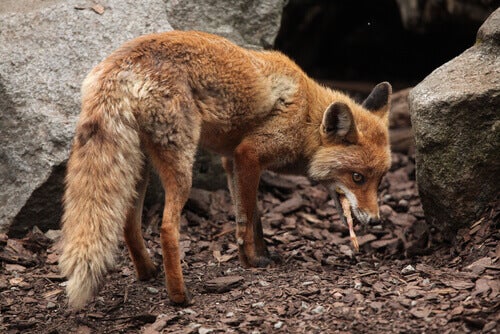 In this article, we’ll discuss wild animals with rabies. Rabies is a viral disease considered to be the deadliest zoonosis in the world. It causes more than 60,000 deaths a year and is a condition that shows us that human health is very similar to animal and wildlife health.

Rabies is spread to humans through domestic animals. An estimated 99% of cases transmitted to humans are by dog bites; therefore, the main way to protect against this condition is campaigning against rabies for dogs.

However, this disease affects a large number of wild animals that act as an incubator, which then infect dogs. That’s why it’s important to know the implications of this disease on wildlife so that we can eradicate it.

Rabies is spread to humans through domestic animals, as they are the most easily infected animals and live more likely to live with us. An estimated 99% of cases transmitted to humans are by dog bites.

A short history about rabies

There are references to this disease from ancient Greece through Aristotle himself, who already described the symptoms of rabies in dogs and humans and related its contagion to a dog bite. Rabies ties in with the werewolf myth, since some of the human symptoms coincide with werewolf stories.

Then, Europeans brought infected animals to the Americas, and that spread the contagion. There was no cure before 1885, when Louis Pasteur found a vaccine that saved the life of young Joseph Meister.

The cycles of rabies

The urban cycle is the most dangerous to humans. Dogs biting humans, as already mentioned, as well as other pets like cats, ferrets, or even raccoons.

However, the wild cycle is also important. This is the cycle that spreads the disease between wild animals, who then spread it to dogs. Controlling it is much more complicated, as we can’t vaccinate thousands of wild animals.

In Europe, the red fox leads the wild cycle, and oral vaccination has reduced the commonness of the disease. Food treated with a vaccine is left in the forests and the animals are vaccinated in this way. Despite these measures, foxes are still a threat in eastern Europe.

Rabies affects other European animals, such as wolves. Wolf attacks on people are virtually non-existent. However, the virus causes changes in the behavior of wild animals. It makes them less fearful and more aggressive.

In the United States, one of the animals most affected by the virus is the raccoon; it’s responsible for almost 40% of cases in the east. Other animals play an important role, such as jackals, skunks, badgers, and other wild carnivores.

We have already mentioned some animals with this disease, including popular exotic pets, such as coatis or raccoons. Many people abandon these animals, which makes the urban and wild cycles even more connected.

Irresponsible possession of exotic animals has become another factor to consider, as wild raccoons are much more likely to bite people than other wild animals.

Bats also contribute to the transmission of the disease. Some strains of the virus are unique to this species, which can spread to others and are considered a risk to these emerging pests. However, this species biting humans is very rare. There were even cases of infection without biting when entering caves with a high presence of infected animals.

Rabies disease helps us understand the concept of unitary health, and understand the importance of vets in people’s health. Veterinary research has greatly reduced the commonness of wild cycles of the virus, reducing the spread to dogs.

Furthermore, it’s hard to understand the enormous reduction in cases in Europe without the vaccination campaigns that these professionals carried out. It allowed the number of rabies cases in people to reduce to zero in many countries.

Dangerous Dog Diseases For Humans
If you have a dog at home, you should be aware of dog diseases that are dangerous for humans. We'll tell you what you need to know. Read more »
Link copied!
Interesting Articles
Illnesses and Treatment
Treatments for Pulmonary Edema in Dogs