Cyclops: The One-Eyed Dog With 2 Tongues

This news is surprising to say the least. A dog has been born with one eye and 2 tongues and no nose. Unfortunately, this event doesn’t have a happy ending. 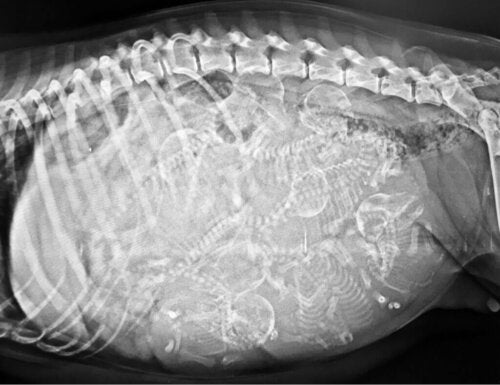 In Greek mythology, the Cyclopes were a race of giants with only one eye on their forehead. Polyphemus is the most famous Cyclops in history. In Homer’s Odyssey, this giant, son of Poseidon and the nymph Thoosa, confronted Ulysses, one of the legendary heroes of ancient Greece.

Until now, the figure of the cyclopes was only part of mythology or a serious and congenital malformation in humans, known as cyclopia. In February 2021, a news item stunned all media outlets: a cyclops dog with 2 tongues was born in the Philippines. In this article, we’ll tell you the story of this fascinating and tragic event.

Cyclops: the dog that defies the rules of nature

On February 6, 2021, a cyclops dog was born in the Philippines (Aklan), as reported by the digital newspaper TimesNoNews. The animal’s mother gave birth to 2 puppies. One of them absolutely normal and the other with the already mentioned cephalic mutation. As you can imagine, the prospects of the little cyclops weren’t very promising.

The puppy’s appearance couldn’t have been more atypical. Small with white fur, this dog had a huge eye on the forehead and 2 large tongues protruding from each side of the mouth. Because the eye took up so much space, the dog’s cephalic structure had no nose or snout.

Unfortunately, this dog had great difficulty breathing from the moment it was born. Given that it was unable to fend for itself, the dog’s keeper took it to the vet, hoping that it would recover with the appropriate treatment. As expected, the puppy eventually passed away at around 10 p.m. the same day, due to respiratory difficulties.

As surprising as it may seem, the story of this dog isn’t unique in the animal kingdom. Cyclopia is a major congenital malformation that occurs in many animals, characterized by the presence of a central eye resulting from the fusion of the 2 eyes and alobar holoprosencephaly —the failure to develop cerebral hemispheres.

Across different animal species, this severe condition occurs in 1 out of every 16,000 births according to estimations. The case of this cyclops dog has been one of the most talked about, but not the only one. If we have a look at humans, cyclopia occurs in 1.05 out of every 100,000 births. Additionally, it causes 1 in 200 miscarriages.

Causes of cyclopia in dogs

This is an exceptionally rare clinical condition, and so it’s very difficult to gather enough information for pinpointing its exact cause. It’s believed that cyclopia is caused by genetic faults or the ingestion of toxic agents by the mother during pregnancy.

The vet who attended the cyclops dog specifies that the pregnant female dog probably ingested toxic elements before giving birth. Moreover, it was an elderly female dog, and so its fertile capacity was naturally reduced over time. All these factors taken together could have led to this interesting development.

Finally, we mustn’t forget that we’re talking about living beings with emotions, feelings, and the capacity to suffer. We can’t put ourselves in the mind of the cyclops dog, but it’s easy to imagine the difficulty it experienced in its few hours of life. Of course, rather than being an eccentric story, this is, of course, very sad news.

For this reason, we need to emphasize that great care must be taken when breeding any animal. If the female in question doesn’t have reproductive viability, even if it can get pregnant, it’s best not to risk it. It’s also necessary to pay close attention to everything a pregnant dog may ingest. This is the only way to avoid these types of problems.

Meet the Strangest Dog Breeds
Strange dog breeds get a lot of attention because of their interesting appearances. Today, we'll tell you about some of the strangest dog breeds. Read more »
Link copied!
Interesting Articles
Animal Rights
It's Important to Promote Responsible Pet Guardianship