The average dog loves to play catch, tug of war, and chase something, but have you ever met a dog that can play soccer? There's one, Ronaldog! 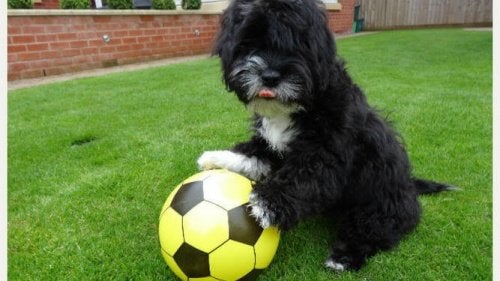 There are many dogs that surprise us with their abilities and habits. The dog we’ll be bringing you today is no exception – a dog playing soccer! Meet Ronaldog!

In My Animals, we’ve always recommended that you adopt a dog instead of buying one, because rescue dogs need to have a home. In fact, most cases like Ronaldog are adopted animals. As we say, this isn’t the exception.

Nobody knows his original name, because this cute black dog was abandoned. But Ronaldog was such a friendly, affectionate and playful dog that he was adopted by the Simpkins family.

Ronaldog joined the Simpkins’ house when he was still a small puppy and since then he showed a special interest in footballs. He didn’t like other toys, he just liked balls that were far bigger than he was.

His skill with the ball started to increase. According to Peter Simpkins, “we had a lot of fun watching him try to control the ball when he was a puppy, but he soon improved his skills“.

Because of that, they decided to find a name more in line with his abilities. They chose Ronaldog, in honor of the famous soccer player Cristiano Ronaldo.

The Simpkins family soon decided to share their dog’s skills with the world on YouTube, without thinking it would go viral!

The video received thousands of likes and comments. For this reason, Ronaldog’s owners decided to keep sharing more and more videos online of their dog playing soccer, they even created a channel with the same name: Ronaldog. Would you like to see one of them? Then click below!

Ronaldog isn’t the only famous dog playing soccer on social media. There have been many others that have made us laugh and even cry. Let’s remember some!

Other dogs on social media

Source of the image: www.holaciudad.com

Games to Help Keep Your Dog Healthy
Today, we're going to show you some games to help you keep your dog healthy. Don't let it lay around, keep it active for a longer, stronger life! Read more »
Link copied!
Interesting Articles
Dogs
Blue Dogs Suddenly Appear in a Russian City