The internet surprises us, animals surprise us. If you put them together then we really have some fun! Today, we'll tell you about Huff, the 'vampire' hedgehog. 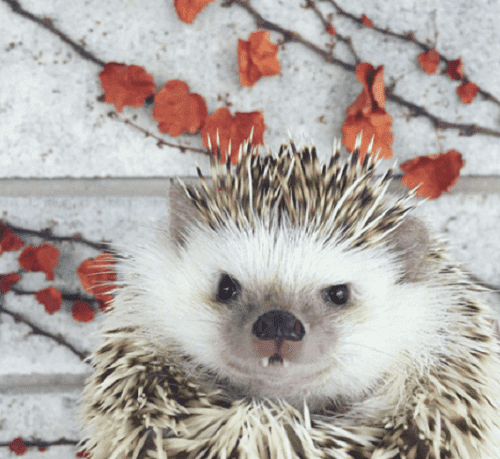 We’ve seen hundreds, maybe even thousands, of pictures of beautiful dogs and cats on the internet. Some of them are in funny positions, some of them look very strange and all of them are sure to give us a good laugh. In today’s article, we’re going to tell you about Huff the vampire hedgehog and how he’s taking over the internet.

On the internet, we’ve read stories about friendships between two animals that are very hard to believe. We’ve also seen some animals doing very interesting things that make us laugh. Today we’ll talk about one of them: Huff the vampire hedgehog.

Although it’s not very common to have a pet hedgehog, more and more people are becoming brave enough to adopt one. The truth is that if the hedgehog doesn’t feel threatened, and is socialized to live around people from a young age, they can be extremely gentle creatures.

Hedgehogs’ faces are very cute and we could fall in love just looking at one, if we weren’t so afraid of them. However, like we said before, it’s an unfounded fear. A domesticated hedgehog can be a pet, just like any domesticated dog or cat.

Interestingly, hedgehogs have two teeth that protrude more than the rest, right in the front of their mouths. That’s how Huff got his name and his owner took advantage of this interesting characteristic.

Huff and his rise to internet stardom

The photos that Huff’s owner puts up of him are amazing. They’re very well done and well-thought out. That’s why he’s one of the most followed pets on Instagram. Additionally, Huff seems to enjoy the photo shoots a lot, because he looks especially happy in all of the photos.

However, not everything in Huff’s life has been happy. His old owner mistreated him and the poor animal fell into a deep depression that he couldn’t seem to get out of. Carolyn began to work with him when she learned about his situation and says that Huff has also helped her a lot with her emotional problems. She says:

Huff is a bit cantankerous and grumpy, but on the inside he’s adorable, tender and full of heart. Maybe that’s why hedgehogs are becoming more and more popular, because people can identify with them.”

Carolyn never believed that her idea could reach such heights, but that’s exactly what happened. Huff, the ‘vampire’ hedgehog is now known worldwide. In addition, according to the comments on Instagram, he makes a lot of people smile with his pictures.

Other famous animals on social media

Huff isn’t the only famous animal on social media. In different articles, we’ve talked about several others. Let’s go over some:

Do You Like Puppies? Check out These Instagram Accounts!
If you like puppies, then you absolutely have to check out some of the Instagram pages in this article. You'll die from the cuteness and laughter! Read more »
Link copied!
Interesting Articles
Animals
The Best Birds to Have as Pets

This animal is quite a charming pet that has become popular in recent years. One of the reasons for this…

Other Pets
Can you have a hedgehog as a pet?

Different animals are becoming more trendy to have as pets. The days of only having cats or dogs are gone…