Discover Why There Are Raccoons in Europe

Why are raccoons in Europe? Originally from the American continent, these mammals are expanding in Europe due to their use as pets and their use in the fur industry. They feed on waste left by humans in cities, so it's not uncommon to see them in landfills. 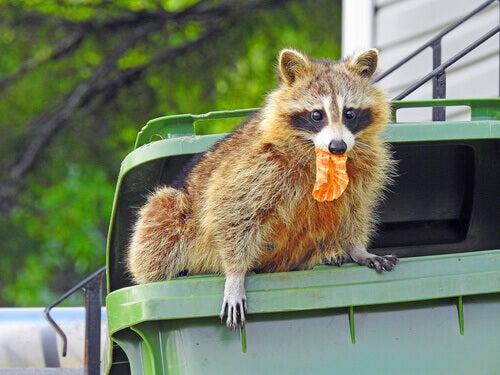 Many don’t know that, despite being an American species, there’s a growing population of raccoons in Europe. It’s worth analyzing how they’ve reached this situation and the part that society plays in this problem.

This species inhabits much of the American continent, especially in the North. They’re omnivorous animals that take advantage of human waste. Therefore, it’s not uncommon to spot them in garbage dumps or neighborhoods.

These animals are very popular, especially in animated movies and children’s programs. In many languages, they’re erroneously known as “washing bears” because of their habit of washing food. And while these animals may look friendly, they’re quite aggressive and have the potential to be dangerous.

How’s it possible that there are raccoons in Europe?

The introduction of raccoons in Europe took place around 1930, either for hunting activities or on fur farms. From there, many animals escaped. After the adaptation of these animals to various ecosystems in Central Europe, they’ve been able to expand.

This wasn’t the first time that the fur industry introduced species that have become invasive. For example, we can mention the American mink. On many occasions, animal liberation groups have released these animals. Instead of keeping them captive, they’ve allowed them to go free, which has increased the problem.

In the case of Spain and Italy, where there are raccoon populations, the main entry point has been the pet trade in this species. Researchers believe that these animals should be banned as pets in Europe, as they are still allowed in many countries.

Invasive species legislation in Spain and other European Union countries allows for the keeping of practically any animal that’s not invasive. However, many animals aren’t deemed invasive until it’s too late. Such was the case with the raccoon and other species such as the coati.

What’s the current situation of raccoons in Europe?

Today, raccoons have become one of the most dangerous invasive species in Europe. This is mainly because of the risk they pose as a transmitter of rabies and because of how they hunt endangered bird eggs.

Raccoon populations have increased enormously, and experts believe that, since 1990, there are 300% more raccoons in Europe. This species is able to adapt to ecosystems without human intervention. And, at the same time, it can adapt to rural and urban environments, where they’ll take advantage of human waste to feed.

This kind of environment has allowed the expansion of the raccoon. Because of the presence of an abundance of food, they’ve been able to increase their fertility and the size of their litters.

The current situation leads us to believe that raccoons in Europe are out of control. Therefore, urgent measures must be taken to control their populations. Unfortunately, this means that, on many occasions, lethal control must be applied to this species. This is neither pleasant nor ethical, but many claim that it’s unfeasible to control the population through castration or captivity.

It’s very important not to feed these animals. The interaction between wildlife and people is unnecessary, and getting food from people makes them more confident, but equally aggressive.

These animals are the ones that most frequently attack people when they feel threatened, even if the animal only perceives this threat. Meanwhile, animals that haven’t been humanized will tend to flee, and the problem with raccoons and other invasive species seems to be increasing due to human ignorance.

6 Exotic Invasive Species You Should Know About
Exotic invasive species show mankind what can happen when animals and plants are put into an ecosystem they don't belong in. Usually, these species are brought there by humans. Read more »
Link copied!
Interesting Articles
Wild Animals
Yellowstone: the World's First National Park

Wild Animals
What Are Wildlife Crossings?
Interesting Articles
Invertebrates
The Life of the Snail - Carrying Its House on Its Back