The stench that comes off these species serves to attract specimens of the opposite sex and, above all, to scare away their predators. In some cases, the smell can be perceived from long distances. In this article, discover the five stinkiest animals. 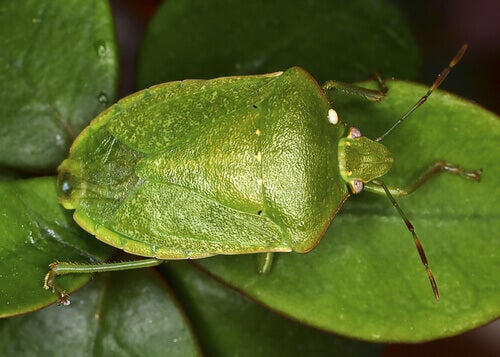 The truth is that some animals are stinker than others. Would you like to know the five stinkiest animals that exist? In this article, we’ll tell you all about them!

The stinkiest animals in the world

Each aroma or smell has a purpose in nature. Whether it’s to scare off predators or to draw the opposite sex’s attention, certain species smell bad (by human standards). Here are the stinkiest animals out there:

Despite its small size, this “flat” insect, featured on the main image of this article, belongs to the Hemiptera family. It emits a strong smell that it produces in the thorax, specifically in the mesothorax, as well as in its third pair of legs, and which has a liquid texture.

There are two reasons why the beg bug stinks. Firstly, to defend itself against predators when it feels threatened. Secondly, to attract a member of the opposite sex. It’s like putting on perfume! However, although other bed bugs consider the smell attractive, other species don’t.

This carnivore is quite smelly. It lives in South America and Southeast Asia, and most people know it because of the strong smell it emits.

Hyenas are also on the list of the stinkiest animals in the world. This is because they feed on decaying animal matter, commonly known as “carrion”, which, of course, has a fairly strong odor.

On the other hand, hyenas usually mark their territory with urine or feces. Both can be sniffed out by humans from several miles away. As if this weren’t enough, hyenas don’t groom themselves too much. However, they do “clean” their genitals like cats.

How could a mammal that seems so cute and peaceful be on the list of the stinkiest animals in the world? In fact, the scent it gives off can be up to seven times that of a skunk. People can smell it several feet away!

The smell it gives off is to avoid being trapped by predators, as is the case with felines. If it isn’t effective, it has another self-defense technique. It gives it a kind of “hug” while piercing it with its thumbs, which have very strong claws.

The last of the stinkiest animals on this list is a marsupial famous because of its short temper, and, of course, certain cartoons. This endemic Tasmanian mammal emits a very pungent odor when it feels threatened, endangered, or when it comes into contact with a species that’s outside its food chain, such as humans.

The Tasmanian devil is quite lonely and shy. It’s easy to understand why its minimal relationship with other beings makes it a smelly animal. The scent gland located at the base of this animal’s tail produces its strong smell.

We hope you enjoyed learning about the stinkiest animals in the world!

Why Do Some Cats’ Bottoms Smell Bad?
Despite being very clean animals, sometimes, some cats' bottoms smell bad. If you're noticing this with your cat, we'll share some possible causes. Read more »
Link copied!
Interesting Articles
Wild Animals
5 Animals that Live in Grasslands