All You Need to Know about Holland Lop Rabbits

Small and friendly, these rabbits make ideal pets and they’re becoming more and more popular. They need minimal care and their genes keep them in robust health. 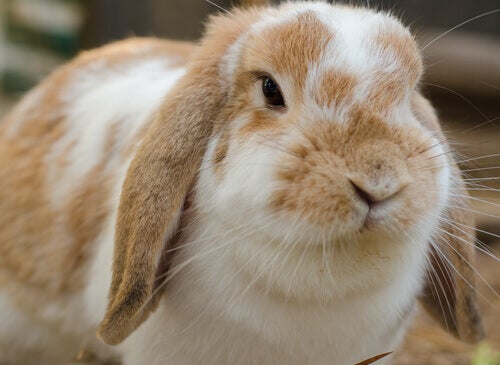 With their floppy ears and tender eyes, Holland Lop rabbits are increasingly being chosen as pets all over the world. They’re also quiet and calm, they get along well with children and other pets, and they’re small. Learn all about them in this article.

This breed began life in the 50s in Holland when a breeder named Adriann de Cock mixed a French Lop with a Netherland Dwarf. After several litters, he managed to get the ears of his Holland Lop rabbits to droop.

These dwarf rabbits weigh about four pounds at most, they’re ‘compact’ – that is, their bodies are short and wide – and they sit like cats, on their hind legs, while lightly resting on their front legs.

Although they’re small, their bodies are muscular and solid, with fluffy shoulders and chests. Their heads are round and their necks so short as to be practically invisible.

Without a doubt, the most interesting physical characteristic of the Holland Lop are its ears, which are unlike those of other rabbits and hares; almost five inches long, they’re furry and flop to the sides, very close to their eyes.

Dense and silky, the Holland Lop’s fur should be brushed and cleaned periodically to keep it in good condition. It’s also normal for it to fall out in the spring months.

As for the colors of their fur, these can be very diverse. Their coats can be of a single color, or have ‘patches’ of one or more colors. White, brown, gray and black are the most common, with orange, chocolate and beige also seen.

The behavior of the Holland Lop

These are cute, cuddly rabbits that make ideal pets because they’re also very loving and calm. However, they’re active and playful too and need a fairly large cage that they can move around in comfortably.

Keep in mind that the females are somewhat wary of people and can become fidgety when carried.

How to care for Holland Lop rabbits

If you’re interested in keeping a Holland Lop as a pet, keep in mind that they’re clean and sociable animals, though they can be somewhat shy at first. You can use food to gain their trust: carrots, pears, apples, alfalfa, dandelion, mint, and sage are their favorites.

As well as this, their diet – rabbits are herbivores – should be supplemented with dried fodder and concentrated food which you can buy at pet stores. These will help to ensure that their teeth don’t grow longer than necessary and keep their digestive system in balance. And don’t forget to change their water daily.

Holland Lop rabbits live in an indoor cage which should be at least 28 in², and you should take them outdoors at least once a day, especially if you have a garden or a patio, or a park nearby. They can have fun running around for a while or playing with pet toys.

Don’t forget that these animals sleep a lot during the day, sometimes with their eyes open, and are much more active at night. Try to take them outside at dusk or dawn, when it’s not as hot, because they suffer somewhat in high temperatures.

Even if they get dirty with mud, food, or excrement, it isn’t advisable to bathe them. This damages the natural coating they have on their fur and is bad for their skin. But don’t worry, they clean themselves.

Holland Lop rabbits don’t suffer from any hereditary illnesses, although you’ll need to take them to the vet every year to make sure that they’re healthy and strong. Early sterilization can extend the life of the animal – they can live up to 15 years – and improve their health.

Tips for Playing With Your Rabbit
Rabbits are ideal pets that don't give much work but can bring you a lot of joy. Here we share some tips on playing with your rabbit. Find out more. Read more »
Link copied!
Interesting Articles
Rabbits
Differences between Hares and Rabbits