Is It True that Cows Have Four Stomachs?

Many people believe cows have four stomachs, but, in fact, they only have one and it's divided into four different chambers. This is because getting all the nutrients from plant matter is a complex task. 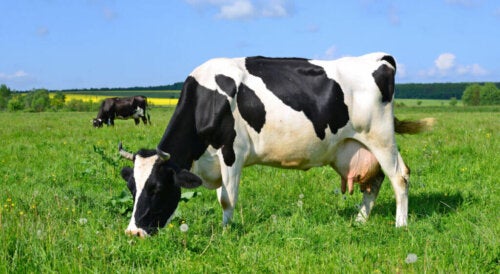 Surely you’ve heard that cows have four stomachs, but this isn’t actually true. What these mammals actually have is one stomach divided into four distinct chambers. This is quite common in ruminants.

Ruminants are vegan animals whose diet consists of stems, leaves, roots, and other plant components made up of cellulose. They have a complex digestive system with which they’re able to digest all this material that eventually transforms cellulose into nutrients their bodies can assimilate.

The cow isn’t the only ruminant. This group includes all animals whose feeding process consists of rapidly swallowing plants, regurgitating them, chewing them, and then ruminating it all again afterward. The bull, goat, sheep, deer, deer, antelope, reindeer, bison, fallow deer, and many other mammals are ruminant animals.

Cows are polygastric animals but don’t have four stomachs

Indeed, their stomach has four distinct compartments: the rumen, the reticulum, the omasum, and the abomasum. The stomach compartment most similar in function to the human one is the abomasum. Continue reading to find out more about the particularities of each segment.

The rumen, or belly, is one of the four chambers of cows’ stomachs

This is in direct communication with the esophagus and considered a “pre-stomach”, along with the reticulum and the omasum. The food goes into the rumen after the initial chewing, where fermentation and absorption of some nutrients take place.

The rumen extracts nutrients from the food that other animals can’t digest, thanks to the process of fermentation that takes place in it. For this reason, cows can efficiently eat and metabolize plant materials such as stems, leaves, seed coatings, husks, and many other materials that others can’t feed on.

After this fermentation, the food returns from the rumen to the mouth through the reticulum. Then, the mouth crushes it more thoroughly and returns it to the digestive tract, where it’ll go through the omasum and abomasum.

The rumen is the largest compartment of all: the rumen of an adult cow has a capacity of 100 to 150 quarts.

This is the second and smallest compartment of the stomach of a ruminant. It rests against the diaphragm and on the sternum. It’s actually next to the rumen and there’s not much separation between these first two sections of a cow’s stomach. Furthermore, it contains fluid from the esophagus during swallowing or from the rumen.

This is the third compartment and is located on the right side of the abdomen, near the liver on one side and the rumen on the other. It contains the food that’s almost digested before it goes into the abomasum and absorbs excess water.

The tripe acts as a giant filter, which keeps the solid vegetable particles inside the rumen, while the water passes freely. With this filtration, the bacteria have more time to digest the food content.

This is the last compartment of the stomach apparatus of ruminants. Some consider it the “true stomach” because it’s where chemical digestion takes place, through the secretion of hydrochloric acid and the release of pepsin and renin enzymes to degrade the food.

Once the food goes through the previous compartments, the curd reaches the intestine, where digestion and, mainly, absorption of nutrients continues.

The esophagus communicates directly with the abomasum during a calf’s first weeks of life. It’s just like the digestive tract of any other non-ruminant animal. This anatomical feature is known as the esophageal groove.

Because calves don’t have a well-developed rumen and, during their first days, the only food they consume is their mother’s milk, this duct keeps it out of the rumen. Thus, it doesn’t ferment and there are no digestive complications, such as vomiting, colic, diarrhea, and Tympanism, among other problems.

The inclination of the head when the calf is suckling is an aspect that facilitates the movement of this duct. This structure is no longer useful after the animal is weaned.

You’ve learned that cows don’t have four stomachs, but, rather, a complex digestive structure useful for efficiently digesting a large amount of plant material. Cattle’s digestive health is important and small changes in their diet can lead to health complications.

Characteristics of Displaced Abomasum in Cows
Abomasal bloat, also known as abomasitis and displaced abomasum, is one of the most common digestive disturbances in ruminants. Read more »
Link copied!
Interesting Articles
Cows
The Rumen, a Microbial Ecosystem Inside a Cow