The Origins of the Maremmano Horse Breed

The Maremmano is an intelligent, sensitive, and robust horse breed. What's more, it has a great capacity to adapt in the face of different types of demands. 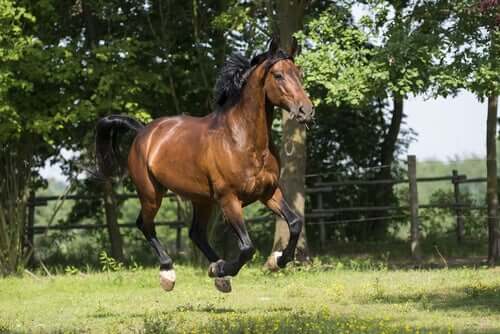 The Maremmano horse breed is almost extinct in its original form but continues to exist as a modified breed. It evolved from the Neopolitan Horse and other European breeds. It was originally used for farm work and with livestock in the Tuscan region of Maremma, north of Rome.

Without a doubt, this is one of the most important and ancient Italian breeds. Currently, there is a systematic reproduction program in order to maintain the ancient genotype and guarantee wider variation within the breed.

The history of its origin

The history of this horse breed goes all the way back to ancient times. As we already mentioned, the Maremmano horse has its toots in Italy, despite a long history of mixing with other breeds.

This horse was present along the Tyrrhenian coast. In fact, it was the horse breed of the Etruscans (800 B.C), the first Italians to take the breeding of horses seriously.

In the era of the Roman Empire, the breed was blended with many others. During this time, Romans ignored and forgot about the careful reproductive measures of the Etruscans.

Later, there was a long period of unproductivity. However, during the Renaissance (16th century), there was a resurgence in the scientific breeding of horses.

Rise and fall in the breeding of the Maremmano

Its robust morphology and its exuberant mane and tail have been highly appreciated characteristics.

Without a doubt, during the times of the Papal State of the Grand Duchy of Tuscany, considerable attention was paid to the breeding of Maremmano horses. Given the strength and powerful demeanor of these animals, people at that time used them to pull stately carriages.

During this period in history, the blood of Arabian, Barb, and Andalusian stallions mixed with the Maremmano. After the unification of Italy (1860), the fame of this breed extended. In order to improve other horse breeds, and many Maremmanos were sent all over Italy. Most were stallions, but some mares made the journey as well.

Maremmanos were in high demand when it came to the cavalry. What’s more, the careful breeding with thoroughbreds resulted in strong riding horses with a good appearance and excellent build.

Following the Second World War, the breed fell into near extinction. However, in the 1970s, interest in these animals rekindled.

Characteristics of the breed

It’s interesting to discover that the environmental conditions of this horse’s natural habitat (the Maremma region) determined its adaptation to difficult environments. Historically, the region never had favorable conditions, which resulted in the selection of a strong, frugal, fertile, and long-living animal.

What’s more, the Maremmano is greatly resistant to illnesses. For this reason, colts enjoy a high survival rate, although they take longer to reach maturity.

Maremmanos may not be the fastest or the most attractive breed, but they are robust and hard working.

The height of these horses at the withers is approximately 5 feet, 2 inches in males by the age of 42 months. As for females, their average height at the same age is 5 feet, 1 inch.

Typically, they have large heads which, in some cases, are convex. Their reproduction tends to be faithful to their type and they have various distinctive characteristics, such as its ram-headed profile and thick hair. What’s more, they have a long mane that’s often wavy.

At the same time, this breed possesses a strong and slightly long back, potent hindquarters, and a well-placed tail. Its legs are short, strong, clean and wide-boned. As for their hooves, they are hard and firm.

The Maremmano Horse comes in any solid color. It’s common to see them with black, brown, laurel, and chestnut coats (the latter only in the case of mares).

The use of the Maremmano

Traditionally, Maremmanos were always the biggest horses in agricultural units and their selective breeding was adapted to satisfy different needs. Over the years, changing demands have had a large influence on their development.

With the mechanization of the army in the 20th century, as well as most forms of agriculture, this breed’s future looks bleak. Currently, the Maremmano and the thoroughbred maintain similar production systems.

Given their docility, this breed makes for an ideal companion for any child or adult to go out riding. This is also one of the reasons why Italy’s mounted police continue to choose Maremmanos as part of their force.

15 Fascinating Facts About Horses
Horses are some of the most beloved animals in the world. But how much do you know about them? Today, we'll give you 15 fascinating facts about horses. Read more »
Link copied!
Interesting Articles
Horses
Horses Rescued from Flood Give Birth: The Miracle of Life

In the town of Wellingborough, Northamptonshire, England, severe flooding often occurs after rainy periods. So much so that the City…

Horses
The Care and Treatment of Horses with Scabies

Scabies is an infectious disease caused by mites, and it affects many different mammals, including humans. However, we're not their…

Horses
A Pregnant Mare: What You Need to Know

A pregnant mare requires special attention and care to ensure that both it and the fetus stay healthy. Generally, you…

Colic in horses, also known as acute abdomen syndrome, is a very common disease that concerns many horse owners. Knowing when the…